The Sri Lankan Police in Jaffna arrested the General Secretary of Mutpoakkuth Thamizh Theasiya Kadchi (MTTK) Sutharsingh Vijayakanth and two of his fellow party members Friday night while they were waging a peaceful fast at Nalloor temple demanding the Sri Lankan President Mahinda Rajapaksa to release all Tamil political prisoners from the Sri Lankan prisons. The arrests were made on the charge that they were getting electricity from a nearby house to the podium of the fasting campaign. The fast was launched as there was no reply from the Sri Lankan President to their letter urging general amnesty to all Tamil political prisoners, the protesters said. Mahinda Rajapaksa is scheduled to visit Jaffna on a two-day visit on October 12. 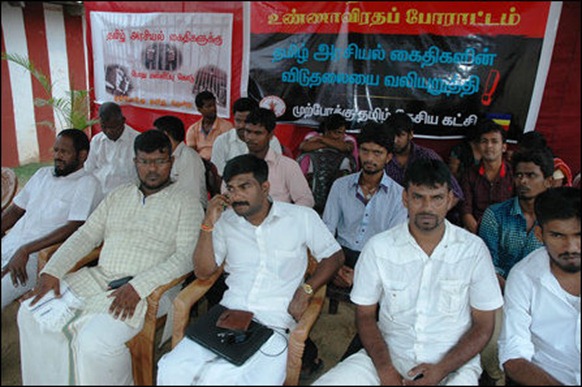 The party of Sutharsingh Vijayakanth was also behind a recent protest in front of the Jaffna District Secretariat.

The arrests were made around 8:00 p.m. as the fasting campaign, which began Friday morning at 10:00 a.m. was gaining momentum.

More than 40 people from various grassroots groups are taking part in the fast on a rotation basis.

Despite the arrests, the campaign will go on as planned till Sunday evening, the MTTK members told media.

“Five years have gone after the war. While certain ex-LTTE personalities, who were in the leading positions in the LTTE have become deputy ministers and confidantes of the presidential siblings, the others are still in prison without any amnesty,” Mr Vijayakanth said while he commenced the fast Friday morning.