“The system that oppresses us is global. The system that oppresses us is united and in solidarity with each other. So we need to be in solidarity with each other against the same system that oppresses us. The Tamil national liberation struggle is a case in point. Your enemies are our enemies”, said Kurdish activist Memed Aksoy, urging for greater solidarity among oppressed nations. In an exclusive interview to TamilNet on Sunday, Mr. Aksoy, who is also a filmmaker and writer, talking about the current situation in Kobane, the nature of the ISIS and its supporters, the duplicity of Turkey, the PKK’s commitment to the peace process, and the changing policies of the West towards the Kurds, gave a concise picture of the Kurdish resistance and the local and global challenges it faces. 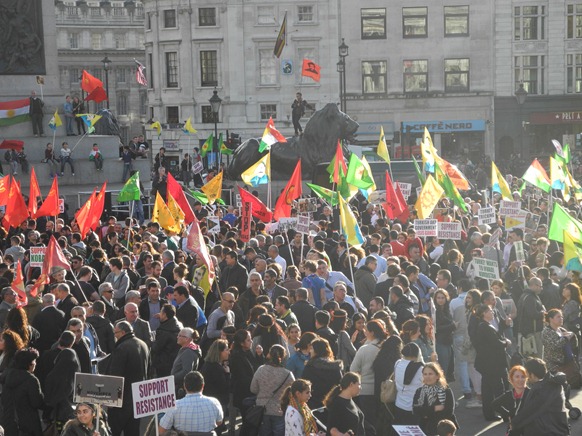 Global Day for Kobane observed at Trafalgar Square in London

Terming the ISIS as “the international hitmen of finance capital”, Mr. Aksoy said that states like Turkey, Qatar, Saudi Arabia and the UAE were backing that organization.

“Turkey has played a negative role, almost a terroristic role on an international and historical scale in providing logistic support, military support, financial support and political support for ISIS and the mentality and ideology that ISIS is trying to spread across the region,” he said.

Explaining that Turkey hosted most reactionary elements of the ‘Free Syrian Army’ in Ankara for the past three years, he said Turkey was one of the key allies in the attempts to topple the Assad regime and they did not differentiate between any of the components of the FSA.

ISIS has been attacking the Rojava revolution for the past two years. But since certain international powers have no use for them anymore, they have changed their tactics towards the ISIS.

Mr. Aksoy noted how world powers ignored the Kurdish struggle against ISIS for over two years but started taking notice only after the fall of Mosul, Iraq in 2014. When the ISIS began its assault on Kobane, the world turned a blind eye for the first 35 days.

“It is only when Kobane did not fall and Kurds around the world started uprising, in UK, in Europe, all over the world, that America had to intervene.”

Talking about how America after much dilly-dallying finally began to support the Kurds, he also said that the biggest obstacle to this support came from Turkey.

Commenting on the ban on the PKK, he said that the removal of the ban would greatly assist the peace process in Turkey.

“The terrorist ban will only lead to more criminalization and more fighting between Turkey and the Kurdish people and the PKK.”

He added that while the PKK has taken several steps to support the peace process, Turkey was unwilling to resolve the issue in a just manner.

He concluded that now was the time for a greater solidarity between Kurds and Tamils.

Thousands of protestors in major cities across the Western world took out rallies on 1 November, which was marked as a Global Day for Kobane, to convey their support to the Kurdish resistance in Rojava, and to condemn ISIS brutalities.

Despite explicit repression, thousands of protestors took to the streets in Istanbul and Diyarbakir in Turkey to convey their solidarity with the Kurds fighting the Islamists in Kobane.

The protests in London were held at Trafalgar Square, which was packed with activists upholding Kurdish flags and flags of the imprisoned PKK leader Abdullah Ocalan.

Several of the speakers at the London event called for a lifting of the ban on the PKK and for the immediate release of Abdullah Ocalan who has been in solitary confinement in a Turkish prison for the past 15 years.

Tamil, Indian leftist, Baloch, Turkish and Iranian leftists, and British activists conveyed their solidarity with the struggle of the Kurds at Trafalgar Square.

Speaking at the event, Karthick RM, research scholar in Political Theory at the University of Essex, emphasised on the importance of the success of the Kurdish struggle for peace and justice in the middle-east. Stating that Kobane is “the most important revolution of this century”, he said that Tamils in Tamil Nadu and across the world stood in solidarity with the Kurds.

Appealing for solidarity among oppressed nations, he said that “A genocide is not possible by just one actor. A genocide is made possible by several actors working together.” Giving the example of Sri Lanka, he argued that just as how international complicity allowed the Sinhala state to execute the genocide in Tamil Eelam, the complicity of certain local and global powers gives ISIS its strength.

Tamil, Bengali and Norwegian activists also participated in the Kurdish protests in Bergen. Despite the heavy rain, the activists gathered in Bergen centrum to stand in solidarity with the YPG/YPJ fighting against the ISIS in Kobane.

Speaking at the event in Bergen, Athithan Jayapalan, Eezham Tamil social anthropology academic, spoke on the significance of the Kurdish spirit of resistance throughout history and the current historical importance of the struggle in Rojava and Kobane. He conveyed the solidarity of the oppressed Eezham Tamil nation to the resistance of the Kurds, and mentioned that the LTTE and PKK had a relation of mutual respect and solidarity.

“When we were subjected to the darkest chapter in our national history, in 2009 May, when over 146,000 Tamils were slaughtered by the Sri Lankan state, we did also stand alone. But the Kurdish people felt our pains; Many Kurdish comrades expressed deep sorrow yet encouraged us to keep the struggle alive.”

“The Rojava revolution has given us faith that sovereign people movements and national liberation struggles will triumph eventually despite the oppressors’ superior power,” he said.