The main opposition United National Party (UNP) in the South on Friday decided to support Maithiripala Sirisena as the common candidate of the opposition to contest the upcoming Presidential election against the SL President Mahinda Rajapaksa. Currently, Mr. Maithiripala Sirisena is holding the post of Minister of Health in the Rajapaksa cabinet and the General Secretary of the Sri Lanka Freedom Party, a constituent of the ruling United Peoples Freedom Alliance (UPFA). 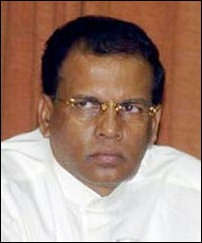 UNP Assistant General Secretary Akila Viraj Kariyawasam said the members of the UNP’s G-20, which was set up to take decisions on the presidential election, made this decision when they met Friday morning.

He said a final decision would be taken at the party’s Working Committee meeting Friday evening.

Mr.Maithiripala Sirisena addressing a media conference Friday morning said that he would be the presidential candidate of the Common Opposition.

He further stated that the SL Opposition Leader Ranil Wickremesinghe would be appointed as the Sri Lankan Prime Minister in the event he emerges victorious.

The 18th amendment to the constitution infringes the rights and freedom of the “people of Sri Lanka,” Sirisena said. “Corruption and injustice has gripped the country while Law and order has fallen,” he said.

"We worked hard to set up People’s Alliance and the UPFA. We helped to be victorious. But, after the war the situation was not much healthy," he further said.

It was rumored that the minister had earlier rejected an invitation to address the Sri Lanka Freedom Party (SLFP) news conference scheduled to be held at the party headquarters in Darley Road, news sources in Colombo said.