Professor Chelva Kanaganayakam, an Eezham Tamil academic who held the rare distinction of being the professor of English in a reputed university of a native English-speaking country, Canada, passed away in Montreal on Sunday. He was Professor of English at the University of Toronto. Recently he has been awarded the highest literary recognition of the country, Fellow of the Royal Society of Canada. A function was held at Montreal related to the award. After attending the function, and while on his way to dinner that followed the function, he suffered a massive heart attack. He was 62. Professor Kanaganayakam’s father, Professor Chelvanayagam was a distinguished Tamil scholar at the University of Peradeniya in the 1960s. Kanaganayakam was Lecturer in English at the University of Jaffna in the late 1970s and early 1980s. 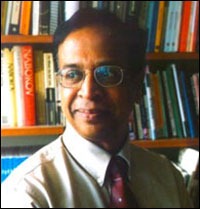 Since 2005 he has been organising the annual Tamil Studies Conference at the University of Totonto, which was first of its kind in the North American continent. He was providing silent leadership to the Tamil literary and academic world in Canada.

Professor Kanakanayakam was also the Director of the Centre for South Asian Studies at the University of Toronto.

Earlier this month, University of Toronto congratulated him on becoming a Fellow of the Royal Society of Canada.

Some of his notable publications are: In Our Translated World: Contemporary Global Tamil Poetry (2013); Counterrealism and Indo-Anglian Fiction (2002); Ed. Lutesong and Lament: Tamil Writing from Sri Lanka (2001); Dark Antonyms and Paradise: The Poetry of Rienzi Crusz (1997);Configurations of Exile: South Asian Writers and Their World (1995); Structures of Negation: The Writings of Zulfikar Ghose (1993); articles on B.S. Johnson, Achebe, Narayan, Rushie, Ondaatje, Desai.

In 2009, Kanaganayakam translated and edited the poems of three Eezham Tamil poets, Puthuvai Rathnadurai, VIS Jayapalan and R. Cheran. Of them, Puthuvai Rathnadurai, who was living in Vanni during the war, was last seen among the people herded to the barbed-wire camps. He was taken into custody by the SL military and was missing since then.

Professor Kanaganayakam’s field of research was Postcolonial Literature. He was lately researching on Contemporary Indian Literature and on South East Asian writing.