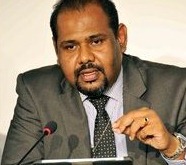 The global and regional powers locked in a geopolitical gambling have brought a contest between Mahinda Rajapaksa and Maithiripala Sirisena. Rajapaksa is backed by China while the West and possibly India back Rajapaksa’s former associate Sirisena, said Gajendrakumar Ponnambalam, the leader of Tamil National Peoples Front (TNPF) on Thursday. Declared that there is no use for Tamil people by going behind any of the two mainstream candidates of the South in the upcoming Sri Lankan presidential election, the former Tamil parliamentarian, who addressed the press on behalf of the TNPF and the All Ceylon Tamil Congress, urged the Tamil people to refrain from backing any of the two candidates. The TNPF leader blamed the TNA for betraying the Tamil people for the second time as it did by backing Sarath Fonseka in 2010.

However, there is a systematic and intended confusion being caused among the Tamils by the secretive approach being adopted by the Tamil National Alliance (TNA), which seems to wait till the last minute and urge the Tamils to back Mahithirpala Sirisena, who is just another Rajapaksa, the TNPF leader said.

Gajendrakumar Ponnambalam declared that there is no use of bringing another Rajapaksa to power in the South. “This is not even a regime change. It is only a matter of changing the presidential person,” he said.

The powers will do whatever for their greed and Tamil people should not allow them being taken for granted in the geopolitical gambling of the powers, he said giving a historical analysis of earlier Sri Lankan presidential elections.

After 17 years of UPN rule, Chandrika Kumaratunga came to power in 1994 with an overwhelming 62% of votes. Kumaratunga, who came to power with the promise of peace in the elections later waged a brutal war against Tamils claiming it as a war for peace, he said. The only leader at that time to warn the Tamils of the danger of electing Kumaratunga was Kumar Ponnambalam, he noted.

Ranil Wickramasinghe came to power in 2001 with the promise of ceasefire with Tamils and a political solution at a time Tamils had demonstrated their military and political power and the international community was pressing for a peace deal in 2004 to contain the situation. Ranil Wickramasinghe later claimed ownership for causing an international safety-net against the Tamils and for causing the Karuna defection.

The LTTE and the TNA urged Tamils to boycott the SL presidential elections in 2005. Even though many seem to come with the false claim that Tigers caused the victory of Rajapaksa, it was the Tamil stand of boycott that gave space for Wickramasinghe to compete with Rajapaksa and reach a narrow margin of almost one lack votes, Gajendrakumar said responding to a question by a reporter. The TNA in 2010 committed a blunder by urging Tamils to vote for Sarath Fonseka. Fonseka, who was the one who waged the genocidal war and seen as a leader among the Sinhalese was defeated by 18 lacks of votes. Mr Sampanthan has later admitted the blunder committed by the TNA.

If the TNA and the LTTE had urged the Tamils vote for Wickramasinghe in 2005 instead of calling for the boycott, Wickramatunga would have received far less votes from the Sinhalese, Mr Ponnambalam observed.

While Rajapaksa has proven his track record of committing genocide and the continuing structural genocide, the main opposition candidate Mahitiripala Sirisena has denounced federalism and is not prepared for even the basic accountability in allowing for investigations of the brutal crimes committed against the Tamil people. Sirisena is being backed by the extremist Sinhala Buddhist JHU, JVP and others aligned with him, Mr Ponnambalam said.

Responding to another question on why TNPF was reluctant to back a third candidate, Mr Ponnambalam said his party was pondering upon the thought of backing a third candidate for a while. But, as he witnessed key members of such parties, despite having their own candidates in the presidential race, were calling on their members to back the common opposition candidate, the TNPF concluded that a such call was not worth the risk, he said.