Unknown attackers stoned the house of Tamil National Alliance (TNA) councillor in the Northern Province, Ms Ananthy Sasitharan, in the early hours of Tuesday, threatening the NPC councillor and her three children while they were sleeping at their residence located at Vadakkamparai in Chuzhipuram in Valikaamam West, Jaffna. Ms Ananthy and her children narrowly escaped from a stone that went through the window inside the house. The attack comes after Ms Sasitharan warned a local media, DAN TV, which backs Colombo regime, that she would be filing legal suit against misusing her name in their advertisement. 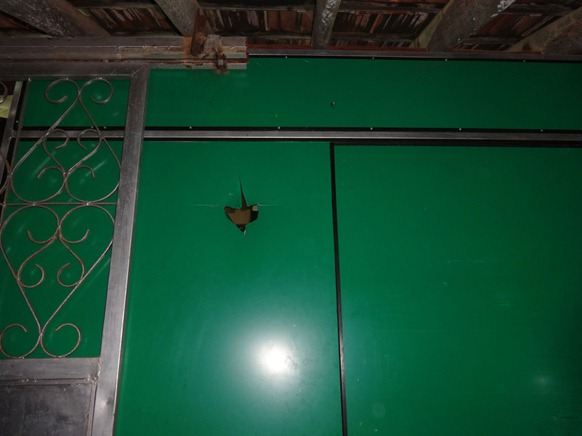 A neighbour spotted a man in boots wearing a jacket ran away from the door of her house when she switched on the light outside the house after the attack.

Both the intelligence unit of the occupying SL military of Rajapaksa regime and elements backing the common opposition candidate Maithiripala Sirisena have been harassing Ms Ananthi Sasistharan, who recently told media that she would be either intentionally invalidating her vote on the election day or would abstain from voting.

On Monday, DAN TV was broadcasting a false advertisement as if Ananthi had sponsored an advertisement on the pro-Rajapaksa channel urging the public to boycott the elections. The move was intended to cause confusion among the public.

In the meantime, the exiled convenor of the Free Media Movement, Sunanda Deshapriya has tweeted an article, which was apparently written by him in a blog site with a cynical attempt to cause discredit to Ananthy Sasitharan by linking her to Douglas Devananda through a Tamil diaspora activist, sources close to the NPC councillor told TamilNet on Tuesday.

The write-up by Mr Sunanda needs to be read by Tamil activists to understand how the behaviour of regime-changing Sinhala activists is going to be in the future in denying Sri Lanka’s genocide against Eezham Tamils.

Ananthy Sasitharan, VS Sivakaran and Ma’ravan-pulavu Sachithananthan are not alone in the telling the public that they disagree with the decision by a few in the TNA hierarchy.

The Tamil National Peoples Front (TNPF) and the Tamil Civil Society Forum (TCSF) had registered their stand well in advance of the TNA announcing its position. 63 Tamil organisations across the Tamil diaspora and Tamil Nadu have echoed the same sort of opinion after the TNA has come up with its position of backing Maithiripala Sirisena without securing any of the fundamental issues affecting the Eelam Tamils.

Ananthy Sasistharan addressed the Human Rights Council session four times during the March 2014 session while TNA’s Sumanthiran wanted to silence her and while the Sinhala human rights defenders working with the West on the regime change agenda wanted her to be present only at the ‘side events’ organised by them and didn’t want her to address the council sessions.

The NPC councillor has been demanding the UN human rights assembly to call for international investigation on genocide and to come out with a mechanism to stop the on-going genocide of Eelam Tamils.