Despite the tension about possible violence in Tamil areas by the occupying Sinhala military and its paramilitary, all arrangements necessary for brisk polling have completed in the two provinces, according to Sri Lankan Government Agents in the North and East. Voters were seen at many polling stations in queue. In the meantime, Sri Lankan military intelligence had stepped up disinformation campaign to divert the voting to another ‘Sirisena’ contesting the elections under the symbol of flag. While a section of the occupying military was hijacking the boycott call, thinking that it will be in favourable of Mahinda Rajapaksa, there were also SL soldiers encouraging the public to vote for the common opposition candidate Maithiripala Sirisena. 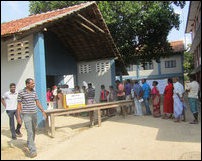 TNA’s Mavai Senathiraja told media that handbills issued in the name of Tamil National Alliance (TNA) calling the voters to spoil ballot papers were fake and was urging the voters to exercise their franchise as requested by the TNA.

In the meantime, supporters of TNA’s Sampanthan and Sumanthiran in the Tamil diaspora started a fresh campaign countering a UK-based Tamil Solidarity activist Senan, who had urged the Tamil voters to cast their vote for Sritunga Jayasuriya.

Mr Jayasuriya has gone on record stating that he was the only candidate recognising Tamils right to self-determination, which included separation.

The TNA and other Tamil groups have already come under criticism for not demanding the removal of 6th Amendment, which constitutionally denies the Tamils right to Self-Determination.

A total of 15,004,490 electors are qualified to cast their votes at the Sri Lankan Presidential election, according to SL voters registry of 2014. Of these, 1,870,073 electors are from the electoral districts in the Northern and Eastern provinces.

According to the SL voters registry, the highest number of voters, 1.637 million, has been registered at Gampaha district, 1.586 million in Colombo, 1.049 million in Kandy and 1.266 in Kurunegala.

The electoral wise figures of the number of voters in the North-East follow: