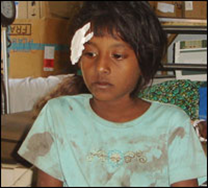 Three bombs exploded first time. Second time, when the bomber returned after 5 minutes from the opposite direction, there were 3 more blasts. But, the third time, bombs exploded with a parachute effect, like an auto explosion,”  said the head of the camp of the Internally Displaced Peoples (IDPs) that came under indiscriminate attack by the Sri Lanka Air Force (SLAF) in the early hours of Saturday. Many children fled into the jungle during the five-minute window before the aircraft returned for the second attack. If not for the fast action of Ketheeswaran, the head of the settlement, and Pulendran, an intrepid IDP, in escorting and moving IDPs away from the refugee camp, the cluster bombs would have wrought havoc killing many, according to the refugees who escaped. TamilNet interviewed both Ketheeswaran and Pulendran, and several wounded civilians for this feature. 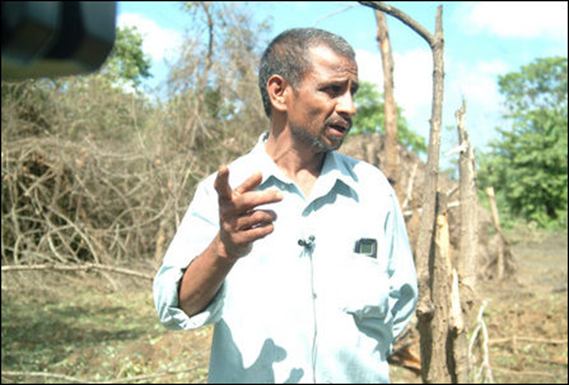 Ketheeswaran, the head of the IDP camp

The IDP camp was set-up by the Tamils Rehabilitation Organisation (TRO), a week earlier to house civilians who were earlier staying at a refugee camp in Paranthan, and was still setting up the basic facilities and smooth supply of relief when the incident took place.

All the refugees TamilNet talked to blamed the Sri Lankan government for intentionally attacking the IDP camp. They said the camp was in a secure zone, located in an island amid flood waters, and there was neither hostile military activity, nor LTTE soldiers close to the camp.

Mr. Ketheeswaran said the attack was an act of genocide.

"It is within the five-minutes window between the first and second bombing, we managed to save a lot our neighbours in the refugee camp, which has separate huts per family, a densely populated IDP hamlet." 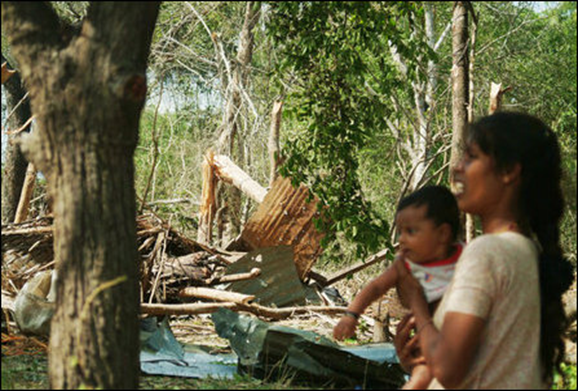 An IDP mother with her child, looking at their hut which was completely destroyed. They had escaped from the hut within the 5-minute gap between the first two bombardments.

"After the first attack, my hut was damaged. I managed to rescue my family members and ran from one hut to another asking people to move out of their huts and to lie down on the ground."

"We were trapped, unable to move from this place for four-five days due to the floods. We barely had food. Now I stand here after having carried 17 wounded with these hands," Ketheeswaran said.
"Since I coordinated creating the refugee settlement, I know that everyone who lived here is an innocent civilian, who fled from areas of war including Pa’l’lamadu, Ve’l’laangku’lam, Theavanpiddi, Madu, Paranthan and Ki’linochchi.  We are living in constant fear not knowing when the bombers will strike again, and where we should run.
“We are fortunate that Pulendran joined me, and our combined efforts saved many lives. If we had failed to act in time, I am afraid we would have lost between 50 and 60 IDPs, including many children,” Ketheeswaran said.
The IDPs who were spared of injuries joined in building make-shift stretchers using whatever cloths available, and carried the wounded away from the site of the bombardment. The only lighting available were some hurricane lamps and torch-lights in possession of a  few, Ketheeswaran added.

Government agents were giving the relief through ration cards. "First, we received 1 kg. rice. Then, only 500 grams, we have only received relief three times since we were forced to flee from our villages. Earlier, in Ki’linochchi, we would get jobs more easily. Now we can’t work and we have been trapped in this refugee camp. We are completely dependent on ration cards and local institutions. As a people who trust on their own ability, it is hard for us to bear the mental burden of being a refugee," Ketheeswaran said.

"Please help us to re-locate the camp from this isolated area to a better place outside," he urged the people who visited the location while TamilNet correspondent was interviewing him. "My wife and four kids had a narrow escape. We can’t live here,” he said.

"The Colombo politicians think that they can win the Tigers only by killing Tamil civilians," says the father of four from Ki’linochchi.

Pulendran Kamalanathan, who helped the civilians with Ketheeswaran, also blamed the attack was a genocidal attack.

"This is not a government that could protect Tamil civilians," Pulendran said describing his ordeal and effort to save the refugees.
55-year-old Nagan Shanmugam, a native of Kaadduppulam in Chuzhipuram, displaced in 1995 from Jaffna due to SLA offensive, to Mallaavi in Vanni,  is a daily wage earner.  Due to recent SLA shelling he was displaced from Mallaavi to Puthumu’rippu, and again to Piramanthanaa’ru. "In the early hours of Saturday, I was awakened by the sound of Va’ndu (Beetle: local word for surveillance aircraft)."

"Later, I fell asleep, but the deafening sound of the bombers woke me up. A big explosion rocked our house. We were all lying on the ground. We were screaming, and was struggling to find a path to flee through the waters surrounding the camp.

"The bombers returned again, and we continued to lie on the ground. My daughter and myself were wounded. My grandson, Sutharsan, 5-year-old, lost his life and my granddaughter was wounded. My daughter was screaming that her child was killed and other wounded. We were helpless. A neighbour came to help us to move through the floods and reach a remote ground as the bombers returned for the third time to hit the hamlet,” he said.

TRO officials told us  that the settlement was a safe place as it was located within the security area announced by the Sri Lankan government. The people living with us were all refugees from other villages. Humanitarian supplies were limited, Mr. Shanmugam said. "I was about to go and get the ration card today, but now I am ended up here in the hospital." Commenting on the humanitarian help from Tamil Nadu, Shanmugam said that it is unlikely that the relief would reach the intended refugees in time, and he would only believe it when the help has reached them.

Nallaiah Pushpavalli, 28, mother of three, a native of 2nd Mile Post in Paranthan,  moved to the neighbouring house on hearing the sound of the aircrafts. Her 81-year-old father, Raman Ramasamy, was killed in the attack with his head decapitated by  a shrapnel; her mother lost her hand, and her 9-year-old boy Jesithan was wounded.
"We were lying on the ground. After the attack, I shouted: ‘Appaa, appaa’, but there was no sound from my dad. There was no lamp. We had turned the lamps off, and extinguished the campfire when we heard bombers. Then I moved my hands towards my father and realized that he has been severely wounded. I managed to check the status of my mother and girl using the glowing embers of firewood which I picked from the campfire that we had extinguished. There is no way to escape due to the waters surrounding without help. Later other help arrived and they managed to bring my mother and the other boy to hospital," Pushpavalli said.
Sangarapillai from Paranthan, father of four, was wounded in the bombing raid. He said all the huts were occupied by civilians, who had fled from an IDP camps in the 2nd Mile Post in Paranthan due to SLA shelling and air-strikes. He said the IDPs had come to the new refugee camp, only a week ago. There were no bunkers. It was not possible to dig any bunkers due to the rains and the floods. Many escaped death as they managed to lie on the ground, he says. Many children managed to run away from the huts into the jungle after the first attack, otherwise many more would have died and wounded, he says.