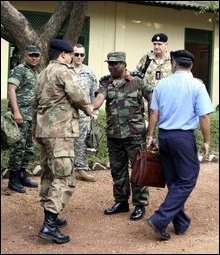 The Defense Advisers/Attaches of seven countries, USA, UK, Japan, India, Pakistan, Bangladesh and Maldives were taken on a one day tour to Vanni by the Colombo government on Monday. Suffering from heavy military debacles and facing serious economic crisis, the Colombo government is badly in need of parading strategic partners and abettors to attract means and justification for its genocidal war before time runs out, note political observers. The visitors represented three of the Co-Chair countries, USA, UK and Japan and four South Asian countries having maritime boundaries.

During the visit the defence advisers met IDPs and surrendered LTTE cadres and observed welfare measures taken by the government, according to a news released by the Sri Lankan Defence Ministry in the wake of latest debacle in Ki’linochchi.

A highlight of the news release was that the visitors had the first-hand information how certain foreign Aid organisations and NGOs had ‘misused’ vital humanitarian aid sent from foreign countries before the areas were ‘liberated’.

The NGOs and the aid organisations never received conducive mandate or cooperation from the Sri Lanka government to carryout development in Vanni and they were not operating in the areas shown to the visitors said an official who worked with the NGOs in Vanni.

"The aim of the government now is to get the money for itself for the genocidal war," the official said.
In the meantime, Sinhala colonisation programmes are carried out in full swing in the guise of development in the Eastern Province that has been claimed to have been liberated by the Sri Lanka government, reports indicate. 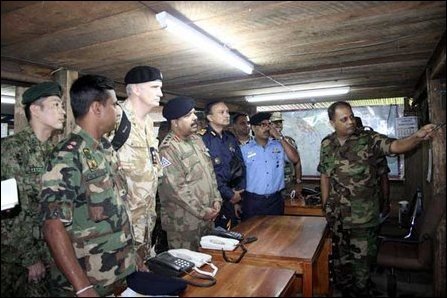 News reports from the East and news releases from embassies show that the ‘Strategic partners’ design their programs for ‘development’ in the East with the coordination of the Sri Lankan central ministries rather than involving the local government and the elected parliamentarians. Tamil political analysts from the East view this tendency as abetting the Sri Lankan government to camouflage the process of structural genocide.
Recently, the Sri Lanka army chief Sarath Fonseka has indicated that had there been more cooperation from some of the strategic partners, the army could have achieved more in the war.

Earlier, on the day of the announcement of Obama’s victory, the US Pacific Command chief while patting the back of Colombo’s army, indicated in a subtle way the time available and task that lies ahead of it.
Political analysts observe an undue haste among those elements especially in Delhi, Washington and Colombo, which perpetrated the theoretical and logistical foundations of the current war on Tamils, to achieve military victory justifying their line of thinking before they are nullified.

Another significant observation made by analysts is the new democratically elected government of Maldives, suffering from a 50 percent drop of its tourism income in the current season, and shortage of foreign exchange, getting openly tagged behind the strategic partners, dropping its three decades old strict neutrality. Ever since the British base finally went out of the country in the 70s, it was never a party to military manoeuvres in the region.