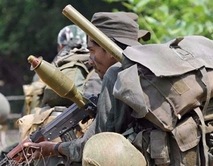 At least 12 Tamil Tiger rebels were killed by government forces closing in on a key rebel-held town in northern Sri Lanka, the defence ministry said Wednesday.

Government troops recovered the bodies of six rebels while snipers killed another six as the military moved to the outskirts of the town of Paranthan on Tuesday evening, the ministry said.

Troops had taken control of two villages adjacent to the town, it added.

Paranthan is about six kilometres (3.75 miles) north of the military’s main objective — the town of Kilinochchi, which is the political capital of the Liberation Tigers of Tamil Eelam (LTTE).

The ministry did not say if security forces suffered casualties in the heavy confrontations on Tuesday.

The latest fighting came as a government ultimatum to the Tigers — designed to allow some 300,000 civilians in areas under their control to leave and seek shelter in government-held areas — drew to a close on Wednesday

President Mahinda Rajapakse announced last week that he would re-impose a formal ban on the Tamil Tigers if civilians were not allowed freedom to leave by Wednesday.

Officials said the government was mulling the ban, which would essentially be symbolic given the scale of the current military offensive against the LTTE and its political capital, Kilinochchi.

An original ban on the LTTE was lifted in September 2002 ahead of an Oslo-backed peace process, which collapsed when President Rajapakse pulled out of the truce in January.

The Tigers have not formally responded to the government’s ultimatum.