While the US Asst Secretary of State Robert O Blake testified before the US Foreign Affairs Committee on the “reduction of the reach of High Security Zones” (HSZ) in the island to support his vision of progress that is taking place towards the US State Department-conceived paradigm of ‘reconciliation,’ evidences that come from Jaffna show that the occupying genocidal SL military is engaged in full-fledged farming and horticulture in the largest HSZ in Jaffna Peninsula, reportedly by using slave labour of the captured LTTE cadres. The Valikaamam HSZ, created after uprooting villages, is in the best of the fertile lands and the occupying military has already leased out large tracts of them to Sinhala businessmen. If farming could take place why mines are an excuse to hand over the lands to the owners, ask Tamils. 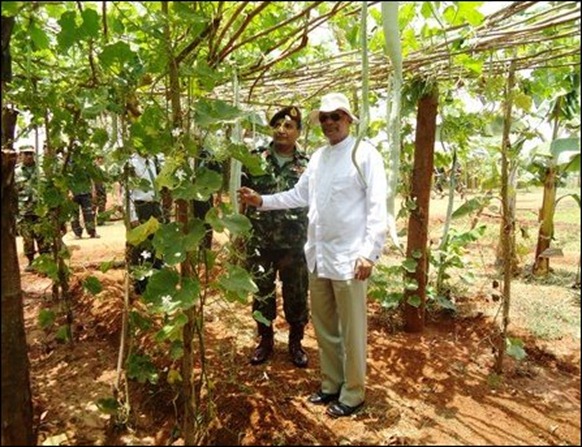 The two Generals, Hathurusinghe [in uniform] and Chandrasri of the occupying SL Military and colonial regime of Colombo, appreciate Snake Gourds in a SL military farm in the High Security Zone in Jaffna

Last week, the commander of the genocidal SL military in Jaffna, the ‘Asian Nobel Laureate’ Maj. Gen. Mahinda Hathurusinghe and the SL Colonial Governer Maj. Gen. Chandrasri visited the farms in the HSZ and discussed plans of marketing the produce in the south.

Sri Lanka Government Agent in Jaffna recently said that it would take ten years to clear the Valikaamam High Security Zone of its mines to handover the lands to the owners. But the occupying SL military is cultivating bananas, papayas and vegetables in places such as Vasaavi’laan in the HSZ, while the owners are not even permitted to see their lands and houses.

The SL military is using all kinds of tactics to avoid handing over the lands, Human Rights organisations in Jaffna said.

Former LTTE cadres, kept undeclared in special camps in Vanni and Jaffna were moved to the farms in the HSZ and are used for slave work, informed sources said.

Valikaamam HSZ is located in the fertile red soil region of the Jaffna peninsula. Only recently, it came to be known that hundreds of acres of land, belonging to the Tamil villages, have been given to individual Sinhalese from the south to cultivate and keep farms in the HSZ.

Recently, resettlement is announced only in the three bordering villages of the HSZ. But, even then, the SL military reluctant in executing that and comes out with all excuses, people in Jaffna said.