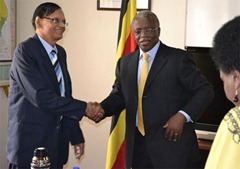 External Affairs Minister G.L Peiris has briefed Uganda on the post war developments in Sri Lanka, the Uganda government said in a statement.

G.L met Uganda Prime Minister Amama Mbabazi in Kampala yesterday and discussed the war and trade ties between both countries.

The delegation had the Sri Lankan Ambassador to Uganda based in Nairobi, T. Raueenthiran and Velupillai Kananathan, the Imperial Group of Companies chief executive officer, among other officials.

The Premier hailed diplomatic ties that date far back in 1972 and attributed the low trade between the two countries to exports in generally similar commodities which do not attract high demand from either country.

“We have faced some turbulence in our political life because our instability began in 1966 when the Constitution was overthrown, up to 2005 but Ugandans are happy now that this is past and we are focusing on industrialization,” Mbabazi said.

The meeting was also attended by the Minister of Information and National Guidance, Mary Karooro Okurut, among others.

Mbabazi noted that in the past Uganda depended wholly on external funding for infrastructural projects but this was not sustainable.  He explained that “the government can now support a wide range of development initiatives due to increased revenue collections.”

The Prime Minister underscored peace as the foundation for every development effort.

He saluted Sri Lanka for defeating the Tamil Tigers, an opposition rebel group that had fought to dislodge the elected government there for a long time.

Prof. Peiris said terrorism was hurting his country but that was being tamed and was confident that the country “is now stable” and developing her tourism potential.

He decried foreign domination, thanking Uganda for support to his government, headed by President Mahinda Rajapaksa.