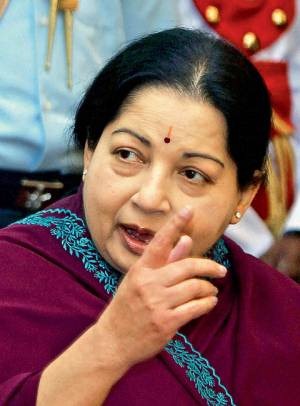 Her letter is bound to increase pressure on New Delhi to realign its Lanka policy in a big way.

Tamils across the world have been critical of Indian softness towards Colombo, particularly in the final stages of the Eelam war that saw close to 40,000 civilians being killed.

In the letter, copies of which were released to the media, Ms Jayalalithaa recalled a memorandum she had presented to PM on June 14 last year and also a letter she sent him 10 days later, drawing attention to a resolution adopted by the Tamil Nadu Assembly on June 8 urging the government to take up the issue of war crimes with the UN and declare the guilty war criminals.

While Ms Jayalalithaa was under the impression that New Delhi was pursuing action in accordance with the TN resolution, media quoted a Sri Lankan spokesperson expressing confidence that India would support his country when the US resolution on accountability during the civil war comes up for voting this March.

“I write to reiterate our stand and to insist India should support the US-backed resolution and condemn the Sri Lankan government when the same is brought forward in the UN Human Rights Council,” CM said.

DMK urges Centre not to back Sri Lanka

The DMK, a key constituent of the ruling UPA at the Centre, on Wednesday urged the Indian government not to vote in favour of the Sri Lankan government, which is facing war crime charges, in the resolution demanding a probe into the alleged war crimes by the island nation in the United Nations Human Rights Council in Geneva.

“India should not back Sri Lanka at any cost when the UNHRC resolution comes up for voting,” DMK president M. Karunanidhi said in a statement.

Recalling the party’s resolution adopted at its high-level committee meeting in April last year, he said perpetrators of the alleged crimes must face action.

Mr Karunanidhi’s remarks come in the wake of Sri Lankan Minister Mahinda Sabarasinghe’s assertion that India had promised support to Sri Lanka when the resolution moved by the US, France Norway and other countries, is put to vote at the UN convention that began on February 27.

Meanwhile, chief minister J. Jayalalithaa said in her letter to PM Manmohan Singh that the legislative resolution had also urged Delhi to initiate action by working with other nations for imposition of an economic embargo on the Lankan government until Lankan Tamils living in camps there are resettled and rehabilitated and are allowed to live with dignity,