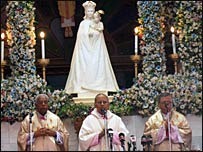 Tamil Catholic priests from the north have called for an international investigation into alleged war crimes in Sri Lanka, contradicting an earlier statement by the head of Sri Lanka’s Catholic Church.

In a letter sent to UN Human Rights Council (UNHRC), the group urges the UN body to urge Sri Lanka to implement the recommendations of the government appointed war panel.

It also calls on the UN to urge Sri Lanka to accept an international probe into accountability issues that has not been dealt by the Lessons Learnt and Reconciliation Commission (LLRC).

"At least now, we urge the Council to act decisively in relation to Sri Lanka, to enable Sri Lankan to move towards genuine reconciliation," said the letter singed by 31 clergymen including Bishop of Mannar, Rayappu Joseph.

A letter sent to UNHRC by a group of 31 clergymen

Although the LLRC has identified abuses by both the government forces as well as the LTTE, said the letter, "it has failed to address critical issues of truth seeking and accountability."

In a statement issued earlier, Cardinal Malcolm Ranjith said the Catholic Church in Sri Lanka opposes the US-sponsored resolution on Sri Lanka at the UNHCR.

"Such efforts by western powers is an insult on the intelligence of the people of Sri Lanka", says the Cardinal.