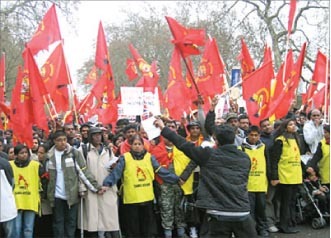 Since the end of the war in 2009, the Tamil diaspora has been incessantly pushing for an independent investigation into alleged war crimes in Sri Lanka. Despite the government claiming that local mechanisms are in place to look into such issues, diaspora groups like the ‘Transnational Government of Tamil Eelam’ (TGTE) have refused to accept that this is enough, and have continued to call for an ‘independent international investigation.’

In an email interview with The Sunday Leader, the TGTE’s prime minister, Visuvanathan Rudrakumaran, commented on the US backed Resolution recently drafted for the ongoing UNHRC sessions in Geneva, and why the TGTE wanted international involvement in investigating alleged war crimes.

Excerpts from the interview:

Q: Do you feel that the UN Resolution against alleged war crimes in Sri Lanka is worded strongly enough to produce some results?

A: We are calling for an Independent International Investigation for the mass killing of Tamils in 2009 in this island of Sri Lanka. According to a UNSG Expert Panel report, over 40,000 civilians were killed in five months in 2009 and women were sexually assaulted. Sri Lankan Government restricted food and medicine to Tamils, resulting in several deaths from starvation and being allowed to bleed to death.

UN Secretary General Ban Ki-moon referred the Panel Report to the UN Human Rights Council to act.  Now the UN Human Rights Council is beginning to act. Even though the current draft Resolution is not calling for an Independent International Investigation, negotiations are still going on about the wording of this draft Resolution. We want that the final draft Resolution should be strong, reflecting our desire to bring those responsible for the killing of our people and let them face international justice.

Q: In backing this Resolution, what results exactly does the TGTE want?

A: We want the current draft Resolution to be strengthened. We also want the mandate of the international commission not to be limited to war crimes only, but also crimes against humanity and genocide. [The] UN Human Rights Council Resolution is one of the avenues to achieve justice for our people.

Q: The Sri Lankan government has reiterated that a local mechanism is already in place to look into the human rights issue. This week at the UNHRC sessions, the government asked for more time to deal with these issues. What is your response to this?

A: As the Expert Panel stated in its report there was no political will to investigate the international crimes committed during the final stages of the war. The Panel stated in its report that it “… has little confidence that [the Sri Lankan judicial system] will serve justice in the political environment.”  The LLRC’s findings pertaining to the final stages of the war is clear proof of that.

We also would like to point out to the world’s governments that justice delayed is justice denied.  Therefore, an International investigation should be initiated without delay.

Q: Apart from the Lessons Learnt and Reconciliation Commission, Sri Lanka has also appointed two military tribunals following the end of the war. Given all the steps the government says they have taken, why does the TGTE continue to push for ‘independent investigations’ ?

A: According to the UNSG Panel Report, the casualties are believed to be more than 40,000. According to the Catholic Bishop of Mannar, Rev. Dr. Rayappu Joseph’s submission to the LLRC, based on the number of people who came into the areas controlled by the Sri Lankan government forces between October 2008 – May 2009 and the population reported to be in Vanni in early October 2008 – May 2009, his estimate of the number of people not accounted for at the end of war was a staggering 146,679 persons.  The LLRC only identified four instances in which there could have been individual excesses by the armed forces. Surely, four instances of individual excess could not have resulted in the deaths of more than 40,000 persons.  Thus, the LLRC is an attempt to hide the policy-oriented, institutionalized international crimes. Such a characterization of isolated excess also provides an escape channel from the serious charges of international crimes leveled in the Panel Report.

Based on the UNSG Panel report and on other NGO reports we contend that there was a policy and a premeditated action which was exemplified by the expulsion of the UN forces in 2006 prior to engaging in mass killing.  Given these facts, it is a fallacy to imagine that the very power structure which stands accused of these heinous crimes will bring itself to justice.  Prosecuting a couple of soldiers is an attempt to hide behind those proceedings.

Q: For the first time since the war ended, Sri Lanka has acknowledged civilian deaths during the final stages of the war. Do you see any progress following this? Why?

A: It seems that the Government of Sri Lanka is attempting to enter into a Plea Bargain.