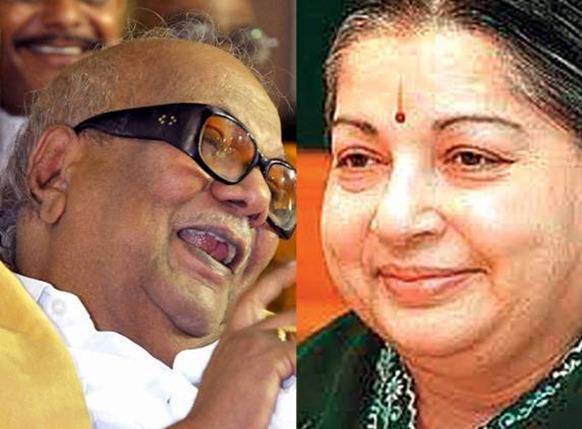 Bitter rivals AIADMK and DMK have found common cause on India’s stand over US-backed resolution against Sri Lanka in the UN Human Rights Council meet for alleged war crimes with both parties determined to raise the issue in Parliament during the Budget Session commencing on Monday.

A customary pre-session briefing by Tamil Nadu Chief Minister and AIADMK supremo J Jayalalithaa to her party MPs held here today is understood to have discussed the issue among others.

Both Jayalalithaa and DMK President M Karunanidhi, whose party is a key constituent of the UPA, have been pressing the Centre to support the US-backed resolution and condemn the alleged violation of human rights targeting Tamils during the last stages of the civil war in Sri Lanka in 2009.

Jayalalithaa had shot off a letter to Prime Minister Manmohan Singh taking exception to India’s reported stand that it was against ‘country-specific’ resolutions at the UNHRC and said this would amount to bailing out Sri Lanka, which is facing war crimes allegations.

The DMK has given a notice for short duration discussion on India’s stand at the UNHRC against Colombo.

Among other issues, the AIADMK MPs would be raising the centre’s move for setting up a National Counter Terrorism Centre (NCTC) and the power crisis in the state.

Slamming the creation of NCTC as an ‘attack on the federal structure of the Constitutional framework’, Jayalalithaa had written to Singh demanding a meeting of Chief Ministers to discuss the issue.

Karunanidhi had on Friday said India should, without any further delay, announce its support to the resolution tabled by America when it is put to vote.