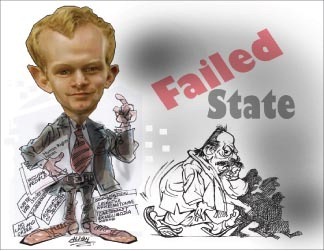 So why the hysterical fear, the unctuous outrage, the noxious anger?

The recommendations of the LLRC are good governance-commonplaces. They include investigating some ‘questionable’ episodes of the war, appointing a Special Commissioner to investigate disappearances, issuing death certificates expeditiously, adhering to the law in making arrests, enacting laws to ‘specifically criminalise enforced or involuntary disappearances’, forming a Task Force to address the needs of women, children, elderly and disabled, providing counselling for traumatised children, helping the Northern Muslims evicted by the LTTE, ensuring media freedom and disarming illegal armed groups. Nothing extraordinary, controversial or groundbreaking; just the absolute minimum needed to achieve reconciliation, build peace and safeguard democracy. The LLRC opined that implementing its recommendations, fast, will render an international inquiry unnecessary. Indeed, had the regime implemented some of the simpler recommendations (such as abandoning the Rajapaksa policy of Sinhala Only National Anthem) and prepared a roadmap for the implementation of the others, the current fracas in Geneva could have been avoided. Such prompt action would have seriously discommoded the pro-Tiger lobby and enabled Sri Lanka to face the upcoming Universal Periodic Review on an extremely strong footing.

Why did the regime not take this obvious, and obviously sensible, path?

Because the LLRC was just another exercise in duplicity, like the APRC or the IIGEP. Weaving multiple webs of deception to escape accountability and responsibility is a standard Rajapaksa tactic. The LLRC was appointed as a foil for the Darusman Commission; its main purpose was to absolve the Lankan Forces – and thereby the Siblings – of all blame in the conduct of the Fourth Eelam War. The LLRC fulfilled this obligation and gave the requisite clean bill of health. But in the interests of credibility it had to make a few valid criticisms and some positive recommendations.

The tale of the LLRC was supposed to end there; its recommendations were for show and not for implementation. Though unobjectionable from a Lankan perspective, the LLRC recommendations are utterly inadmissible from the Rajapaksa point of view. The Siblings are viscerally opposed to any limits on their own power, de facto or de jure; illimitable power and total impunity are necessary preconditions to strengthen Familial Rule and ensure Dynastic Succession.

According to media reports there had been 29 abductions between October 2011 and February 2012. These include the Colombo businessman, abducted from his suburban home days before his fundamental rights case came up before the Supreme Court and the handcuffed detainee abducted in front of the Hulftsdorp courts complex. Such obscene violations of the law cannot happen without the knowledge and blessings of the rulers. For such abusive rulers even the tame recommendations of the LLRC would be totally anathematic, because, if implemented, these can impede, however marginally, their right to rule as they please.

Words, in uncountable numbers, have been and will be used to describe and decry the hypocrisy of Western powers and their many crimes. But Western culpability and hypocrisy cannot be used to gainsay another unarguable fact – that the Rajapaksa regime too is innocent neither of hypocrisy nor of crimes. In Geneva, over this issue, no one occupies the moral highground. Not every contest between the small and the big can be framed as a David vs. Goliath battle.

The sovereignty argument used to oppose the Geneva Resolution is as much of a non-sequitur as the ‘Ugly American/Westerner’ argument. In actuality the Geneva Resolution is no more a violation of Lankan sovereignty than the conditionalities imposed on Sri Lanka by the IMF; rather less so, since it merely urges the Rajapaksas to implement the recommendations of their very own LLRC. The IMF conditionalities attached to loans are a serious violation of national sovereignty and last month’s price-hike tsunami was caused, in part, by the regime’s decision to succumb to IMF pressure in order to get its cash-starved hands on the final tranche of the IMF loan.

If the regime can impose unimaginable economic burdens on the masses at the behest of the IMF, why cannot it take steps to improve its human rights performance at the request of the UNHRC? The Rajapaksas do not find IMF conditionalities intolerable because these do not impede their right to impunity. Had the IMF, instead of demanding price hikes and welfare cuts, requested a reduction in military expenditure or in the monies spent on keeping Sri Lanka’s parasitic political caste in clover, the Rajapaksas would have been screaming about imperialism and foreign intervention. Ultimately the only sovereignty the Siblings want to protect is not national/popular sovereignty but Rajapaksa sovereignty. In the Siblings’ lexicon national sovereignty means Rajapaksa impunity.

True the Rajapaksas are using the Geneva fracas to divert public attention from exacerbating economic ills. But had there been no Geneva Resolution, the regime would have implemented the next round of price hikes by now. Lankans are being spared of gas, milk powder and train fare hikes, albeit temporarily, thanks to the regime’s Geneva problem. Until that ends, the Siblings need to maintain the pretence  that they, and their Southern economic victims, are all in the same tight corner.

For Delhi, Lankan Tamils are a mere sideshow; its main concerns are India’s national interests and the Congress Party’s political interests. How will India balance these two contradictory concerns in Geneva?

Will Delhi back Colombo to keep out Beijing? Or back the US Resolution to keep Tamil Nadu happy (an important consideration given the far from favourable outcome of the recent regional assembly elections).

The oil factor has added a new dimension  to Indian concerns about Chinese presence in Sri Lanka. India does  not want Chinese companies to drill for oil in the waters between the two neighbours. Thus “India is persuading Sri Lanka to allocate oil exploration blocks in the waters that separate them as it considers the location too strategically important to allow companies from other nations to base themselves in this area” (The Hindu – 6.3.2012). Sri Lanka seems to be trying the usual evasive tactics but unlike in the case of devolution, India may be in deadly earnest. “New Delhi expects a favourable response after having stood by Sri Lanka during its annihilation of the LTTE’s military structure even though sections of the world community and Indian domestic public opinion assailed the security forces for human rights abuses” (ibid).