The US-tabled resolution at UNHRC, based on the fundamentally flawed LLRC recommendations, is extremely disappointing and counter-productive, said Gajendrakumar Ponnambalam, leader of Tamil National Peoples’ Front (TNPF), in a press meet held at the party office in Jaffna on Saturday. The resolution envisages an accused in the violation of international humanitarian law to become the investigator of the crime. If the LLRC findings are going to be the ‘starting point’ for any future prospects, chances of progress are difficult. Rather than keeping the expectations of the grieved party at the bare minimum, the resolution should begin with the UNSG panel report. What need investigation are the genocide of 60 years culminating into the war and the on-going structural genocide. Justice could come only from independent international investigation, he said.

Our position is that what is happening in Sri Lanka is a systematic genocide. It has been happening for the last 60 odd years. What happened in the last stages of the war was taking that genocidal project to its extreme.

It has been three years since the war ended. There are several steps that are being taken currently that carry on the structural genocide of our people. What is happening in Sri Lanka and particularly to the Tamil nation in the island of Sri Lanka is the dismantling of the existence of the Tamils as a distinct nation of people. That is what is happening and it is that what has to be investigated and our belief is that if there is any prospect of justice to be met, it can only happen through one international independent investigation. Nothing short of it was advised, Gajendrakumar said in the English session of the press meet. 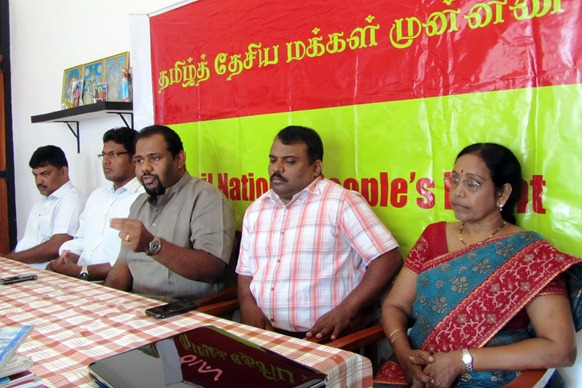 The TNPF press meet was held by Mr. Gajendrakumar Ponnampalam along with party officials S. Kajedren, Pathmini Sithamparanathan and Manivannan

Tamil people should not keep quiet anymore. Their mass organisations and civil groups should realise their duties and the fact that the unfolding scenario has no room for individual issues.

It is futile for the Tamil political leadership, positioning itself against the aspirations of the people, to again and again get trapped in the old ways of polity. The next stage should be a mass struggle.

In the given context of political vacuum, the Tamil National Peoples’ Front (TNPF) should function as an alternative force, is a demand that comes from certain sections in our homeland as well as in the diaspora. But we try to avoid becoming another political party. Our politics has to be a mass movement. At the moment, the contribution of civil groups in our society is historic. Such a civil movement has to be built up in every part of our homeland. We only like to function participating with the civil movement.

There is an on-going campaign that the US-resolution at Geneva is against Sri Lanka and it would benefit Tamils. But, the resolution completely harps on the LLRC recommendations of Sri Lanka.

The LLRC was conceived only as an escape route for Sri Lanka. The Tamil National Alliance (TNA) has earlier rejected it completely.

We want to categorically state that the USA has disappointed Tamils by basing the resolution on the LLRC recommendations.

During the war, when I was part of the TNA and its foreign affairs committee, the international diplomats whom we met have assured us and wanted us to believe that they had warned the Colombo government of dire consequences if there were a bloodbath.

Now, after 3 years of what had happened the resolution comes in Geneva, exploiting the sufferings of Tamils. To muffle the escalating criticism, an excuse is said that it is a ‘first step’ and the process should go ‘step by step’.

Tamils have to be careful.

While Tamils face day-to-day structural genocide and annihilation of their nation from various angles in the post-war context, to what extent such a resolution could exert pressure on Sri Lanka is doubtful.

Sri Lanka knows this well, but its efforts will be to dilute the resolution further, far below the level of any Tamil aspirations. In such an eventuality, the possibilities of enhancing the resolution are doubtful.

Besides, the resolution envisages the accused to become the investigator. The UNSG panel experts have pointed out that the LLRC recommendations are too weak.

When the LLRC report was out, the TNA rejected it. But when the USA based its resolution on the implementation of the LLRC recommendations, the TNA leadership in a written statement sent to the 47-member countries of the UNHCR, has not only welcomed the report but has also argued that the recommendations contain all the unfulfilled promises of earlier SL governments and the implementation of them would satisfy all Tamil aspirations.

Once the TNA has taken this stand, it would be difficult for Tamils to come out of the bindings of this resolution, if it is going to be passed at Geneva. This is a big challenge for our future.

The whole exercise seems to be ruining Tamils with the permission of Tamils. Even after the truth becoming explicit, Tamils cannot be aloof by handing over their polity to politicians. They should be awake at least at this juncture, Mr. Gajendrakumar Ponnampalm urged at the press meet.