The DMK was seemingly upset yesterday when the President’s address to the Parliament failed to mention anything about the plight of the Sri Lankan Tamils, much less the ongoing discussions on the alleged human rights violations in the island nation.

Senior DMK MP and spokesperson in Delhi TR Baalu didn’t hide his party’s displeasure. He reiterated DMK’s demand that India should support the resolution against Sri Lanka at the UNHRC in Geneva this week and that the party will not settle for anything less than that.

Earlier in the day, DMK President and former Chief Minister Karunanidhi had raised the same demand in the same tone.

“There are many such atrocities. That is why I am consistently urging India to support the resolution against Sri Lanka. All political parties in Tamil Nadu have taken a stand on the issue and the Indian government should fulfill their aspiration,” he said.

“Will you withdraw support to the Congress?”

“We will decide later,” was Ilangovan’s reply. Sounds so familiar. 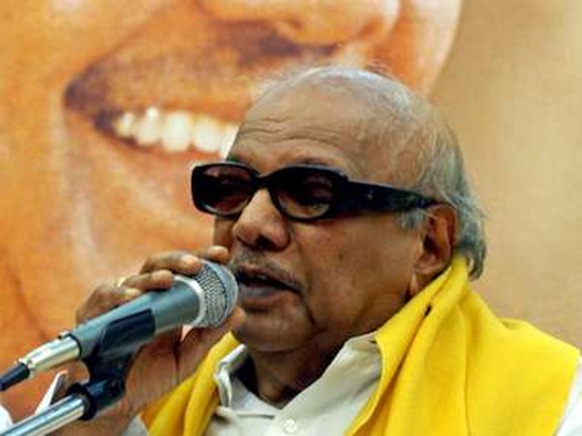 Too many times Karunanidhi has made demands and backed down. Reuters

This is not the first time that the DMK is making such a demand. In March first week, TR Baalu met the Prime Minister Manmohan Singh and handed over a memorandum asking him to support the resolution. Baalu then told the media that Singh had assured him that he would speak to foreign minister SM Krishna and get back to his party.

Has Singh ever got back to Baalu or his party? Nobody knows.

DMK’s memorandum didn’t seem to work because we haven’t heard an unambiguous position by the centre on the issue. Both the reported statements of Singh and Krishna were mired in diplomatese.

The emergence of new macabre evidence of alleged human rights violations by the Sri Lankan army, particularly in the killing of LTTE leader Veluppillai Prabhakaran and his son, has generated all-round outrage in Tamil Nadu. The state, which had been divided in its support to LTTE, is now unanimous that the perpetrators of the alleged war crimes against Tamils in Sri Lanka should be brought to book.

But the only party that is sharing power with the Congress, which ought to take a call on this, is DMK. It can indeed queer the pitch for the Congress.

Therefore the question to DMK is: “will you leave the Congress if India either opposes the resolution or abstains from voting?”

“Will you really stand up for the cause that you have made a political and racial virtue of?

Will Karunanidhi really prove that he is truly the “leader of Tamil race” as he is hailed to be by his supporters?

Going by the past, it’s highly unlikely. As in the past, the bluster and bravado might just end in a whimper. Some senior Congress leader will fly down to Chennai and pat the DMK back to submission.

The theatrics of DMK on the Sri Lankan Tamil issue in the recent past has been interestingly predictable and repetitive.

During the height of the war, Karunanidhi raised the issue with the centre many times and even issued ultimatums, but nothing happened.

Subsequently, Sri Lanka went ahead and finished off the war, in which according to the UN figures about 40, 000 Tamil civilians were killed and about 290, 000 were displaced, most of whom ending up in squalid detention centres.

In this context, it will be interesting to look at the DMK rhetoric on Sri Lankan Tamils

“Dr. Anna (CN Annadurai, the founder of DMK and former Tamil Nadu chief minister – explanation ours) once metaphorically explained that the sea water is salty because the tears of the sufferings of overseas Tamilians flowed into it. When the Sri Lanka troops and Sinhala Chauvinists systematically began the genocide of Tamils, Kalaignar (as Karunanidhi is referred to) having dedicated himself for the life and freedom of Tamils wherever they live, pursued all diplomatic efforts to defend the Tamil race and their rights, provided necessary assistance to all Tamil organisations in Sri Lanka and mobilized support among the political parties in India for the cause of Sri Lanka Tamils.”

“Dr. Kalaignar resigned from the Tamil Nadu Assembly (in 1983) as a mark of protest. The DMK believes in the dictum “We do what we say, and we say what we do.” In spite of its open and clear commitment to an honourable settlement to provide lasting peace for Sri Lankan Tamils, opportunists forced the Central Government led by Mr. Chandrasekar to dismiss the DMK Government in 1991 alleging secret links with LTTE. “Loss of power”, as Dr Kalaignar used to say, “is Just loss of towel on the shoulders”, and he forebore the dismissal of his Government though entire India was shocked.”

Karunanidhi and DMK are not alone in the Dravidian rhetoric on Sri Lankan Tamils.

In the 2009 parliamentary elections, AIADMK leader J Jayalalithaa’s entire political campaign was based on the demand for a “Tamil Ealam,” a separate homeland for Tamils in Sri Lanka. In her poll-speeches, she had thundered that her party would get the “Tamil Eelam.”

In 2009, the world was outraged by the alleged atrocities against Tamil civilians in Sri Lanka and hence it appeared to be an emotionally appropriate issue in Tamil Nadu. in 2012, with the new Channel 4 video as well as the concerted efforts of the western nations to press for accountability of the Sri Lankan government, the issue is politically expedient again.