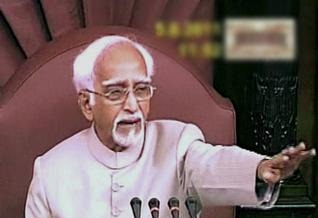 DMK and AIADMK with support from Left today forced adjournment of Rajya Sabha till noon after creating uproar over the government’s stand on a resolution against Sri Lanka in UN Human Rights Commission.

As soon as the House met for the day, DMK members were on their feet displaying banners demanding that the government must support a resolution moved by U.S., France and Norway in the UNHRC against the alleged atrocities committed on Sri Lankan Tamils during the island nation’s civil war.

DMK was joined by members of its rival AIADMK and Left parties in seeking a response from the government on the stand India would take on the resolution.

Chairman Hamid Ansari initially disallowed them saying Leader of the Opposition Arun Jaitley has made a request for making a statement and he has given him permission to speak.

“No banners please… your turn will come,” he said.

Mr. Jaitley, however, said he was willing to make his submission after the issue of Sri Lankan Tamils was raised. Mr. Ansari then allowed the members to raise the issue.

T. Siva (DMK) said it was the moral responsibility of India to support the resolution in UNHRC condemning excesses during civil war and killing of thousands of innocent people.

V. Maitreyan (AIADMK) said the Tamil Nadu Assembly had passed a unanimous resolution asking the Centre to take up the issue of war crimes committed by Sri Lanka with the U.N.

T.K. Rangarajan (CPI-M) said a credible inquiry committee should be formed to look into atrocities committed against Sri Lankan Tamils.

B.S. Gnanadesikan (Cong) said while India should support the resolution, it “must maintain relationship” with Sri Lankan government so that assistance to 30 lakh Tamils in the island nation can continue.

The UPA government, he said, had provides 50,000 houses and medical and other aid to the Sri Lankan Tamils. “If doors are shut, who will help,” he said suggesting that diplomatic options should be left to the Prime Minister to choose.

Mr. Bansal said, “We do not know what is in the resolution before the Council.”

This, however, did not satisfy the members who wanted an assurance that the statement would be made today itself.

As Mr. Ansari called Mr. Jaitley to make his submission, DMK and AIADMK members moved into aisles seeking a response from the Prime Minister, who was present in the House.

Mr. Bansal’s remark that the statement would be made as soon as possible, did not pacify the members who moved into the well of the House.