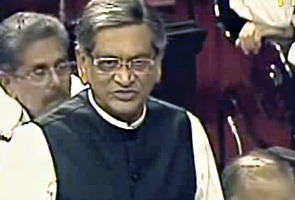 Parties from Tamil Nadu demanded again today that the government commit to voting against Sri Lanka for its alleged war crimes at a United National Human Rights Council session in Geneva. Members of  parliament from the ruling AIADMK in Tamil Nadu walked out of the Rajya Sabha this morning after tearing the statement made by Foreign Affairs Minister SM Krishna on the issue. Here is Mr Krishna’s entire statement.

I rise to inform the House on "The Situation in Sri Lanka". At the outset, allow me to convey that I fully share the concerns and sentiments raised by the Honourable Members of this august House regarding the welfare of Sri Lankan Tamils. 2. The end of the long period of armed conflict in Sri Lanka in May 2009, left around 3,00,000 Internally Displaced Persons (IDPs) living in camps in Northern Sri Lanka and general devastation of infrastructure in the affected areas. 3. Since the end of conflict in Sri Lanka, the focus of Government of India has been on the welfare and wellbeing of the Tamils citizens of Sri Lanka. Their resettlement and rehabilitation have been of the highest and most immediate priority for the Government. 4. The Prime Minister, in June 2009 immediately after the conflict announced a grant of Rs. 500 crores for relief, rehabilitation and resettlement work in Sri Lanka. The Government of India has implemented and continues to implement a wide range of projects covering assistance projects for IDPs in the areas of housing, de-mining, education, connectivity, livelihood restoration, economic revival, etc. We have been informed by representatives of Sri Lankan Tamils that the tractors, seeds and agricultural implements gifted by the Government of India have greatly benefited the people in the area.

5. India also announced the construction of 50,000 houses, mainly for IDPs in Sri Lanka. During my visit to Sri Lanka in January 2012, I handed over first lot of completed houses to the beneficiaries at Ariyalai, Jaffna and Kilinochchi. These houses have been constructed under a pilot project for construction of 1000 houses. As of end-February 2012, a total of 365 houses had been completed, another 370 houses completed up to roof level and 230 houses completed up to lintel level. It may also be kept in mind that construction is taking place in largely inaccessible areas, which in many cases has to be freed of mines and other explosive ordinance and cleared of jungle.

6. In December 2011, the Cabinet approved the modalities for construction and repair of the remaining 49,000 houses. A Memorandum of Understanding for construction of these houses was signed between India and Sri Lanka on 17th January 2012 in Colombo. The project is expected to be completed within three years of commencement of work on the ground. 7. In addition to houses, I also gifted bicycles to IDPs and handed over hospitals and schools rehabilitated under the assistance of the Government of India in the Northern Province of Sri Lanka.8. I would like to underline that it is mainly as a result of our constructive engagement with the Government of Sri Lanka and our considerable assistance programme that a modicum of normalcy is beginning to return to the Tamil areas in Sri Lanka. There has also been progress given the withdrawal of emergency regulations by the Government of Sri Lanka and the conduct of elections to local bodies in the Northern Province of Sri Lanka.

9. Our primary objective in all that we are doing in Sri Lanka is to ensure the welfare and wellbeing of Sri Lankan Tamils, including IDPs, and to assist in the reconstruction and development of areas affected by the conflict. Honourable Chairman, 10. Several Honourable Members of the House have raised the issue of alleged human rights violations during the protracted conflict in Sri Lanka and on the US-initiated draft resolution on ‘Promoting Reconciliation and Accountability in Sri Lanka’ at the ongoing 19th Session of the UN Human Rights Council in Geneva. 11. Concerns have been expressed by various quarters on allegations of human rights violations, including as shown in the Channel 4 documentaries; it is the responsibility of the Sri Lankan Government, in the first instance to investigate and inquire into them through a transparent process. 12. We understand that the Government of Sri Lanka has initiated a series of measures, including appointment of a Cabinet Sub-committee to monitor implementation of the proposals in the National Human Rights Action Plan (NHRAP) and reactivating the National Police Commission, in line with the recommendations of the Lessons Learnt and Reconciliation Commission (LLRC) report. Separately, the Sri Lankan defence authorities are reported to have appointed a Court of Inquiry to look into allegations of human rights violations as required by the LLRC report.

13. The Government of India has, nonetheless, emphasised to the Government of Sri Lanka the importance of a genuine process of reconciliation to address the grievances of the Tamil community. In this connection, we have called for implementation of the recommendations in the Report of the LLRC that has been tabled before the Sri Lankan Parliament. These include various constructive measures for healing the wounds of the conflict and fostering a process of lasting peace and reconciliation in Sri Lanka.

14. We have been assured by the Government of Sri Lanka, including during my visit to Sri Lanka in January this year, of its commitment towards pursuit of a political process, through a broader dialogue with all parties, including the Tamil National Alliance, leading to the full implementation of the 13th Amendment to the Sri Lankan Constitution, so as to achieve meaningful devolution of powers and genuine national reconciliation. We hope that the Government of Sri Lanka recognising the critical importance of this issue acts decisively and with vision in this regard. We will remain engaged with them through this process and in the spirit of partnership encourage them to take forward the dialogue with the elected representatives of the Sri Lankan Tamils. 15. Honourable Members may be aware that the Sri Lankan authorities had said they would be happy to receive an all-party delegation of Members of both Houses of our Parliament. We are working to undertake such a visit at the earliest. Honourable Chairman,

16. Several Members have raised the issue of a draft resolution initiated by USA at the ongoing 19th Session of the UN Human Rights Council at Geneva on the issue of reconciliation and accountability in Sri Lanka.

17. I would like to highlight here that on such sensitive issues we will need to consider the implications of our actions carefully. Any assertions on our part may have implications on our historically friendly relations with a neighbouring country. We would also need to examine whether our actions will actually assist in the process of reconciliation in Sri Lanka, and enhance the current dialogue between the Government of Sri Lanka and Tamil parties, including the Tamil National Alliance. 18. As far as our position on the resolution is concerned, we are engaged with all parties in an effort to achieve a forward looking outcome that is based on reconciliation and accountability rather than deepening confrontation and mistrust between the concerned parties. I may mention that the issue of human rights allegations against Sri Lanka is yet to come up for formal discussion at the 19th Session of the UN Human Rights Council in Geneva. A view on this issue will be taken as and when the time is finalized for consideration of the draft resolution on Sri Lanka in the UN Human Rights Council. Honourable Chairman, 19. I, therefore, would like to inform this House that our objectives, as always, continue to remain the achievement of a future for the Tamil community in Sri Lanka that is marked by equality, dignity, justice and self-respect.

20. I may assure the House that the Government will bear in mind the views and sentiments expressed in this House, and once a final view is taken Government will keep the Parliament informed.