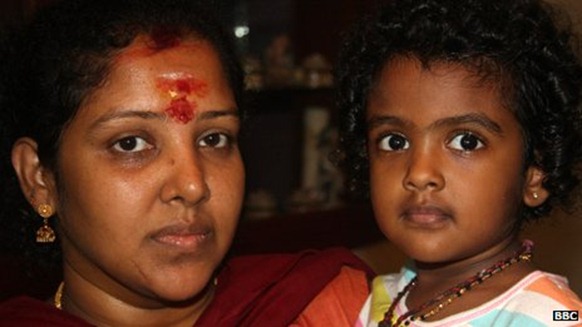 Almost three years after the end of the civil war, Sri Lanka is still dogged by allegations of human rights violations. Amid fresh moves in the UN’s Human Rights Council to hold Sri Lanka to account, the BBC’s Charles Haviland in Colombo reports on a rise in sinister abductions by anonymous squads in white vans.

At a small shrine in her home, Shiromani lights a candle and rings a bell, offering prayers to the Hindu deities. She has few consolations now.

Her life has been a nightmare since her husband, Ramasamy Prabagaran, a Tamil businessman, was snatched by eight men outside their front door last month, in front of Shiromani and their three-year-old daughter, and taken away in a white van.

"He was screaming, calling for help, hanging on to the gate," Shiromani said tearfully.

"There were people and vehicles in the street but no-one came to help as they had T56 guns and pistols. They pushed me down. I pleaded: ‘Sir, don’t do anything’."

But the vehicle disappeared and she was unable to follow in her own car.

Mr Prabagaran was abducted shortly before his case accusing the police of torture was due to be heard. He had been held for two-and-a-half years by them and, he claimed, badly tortured before being released without charge.

Human rights campaigners say there were 32 unexplained abductions between last October and this February, mostly in Colombo or northern Sri Lanka, the victims a mix of Sinhala, Tamil and Muslim.

In addition, 10 mostly unidentified bodies were found in February alone. It’s not clear how many of these, if any, are linked to the disappearances – but their discovery has added to a heightened sense of unease here.

Of the kidnappings that were witnessed, most were said to have taken place in white vans – which for years have been the vehicle of shadowy gangs behind enforced disappearances.

One victim was seized right outside the Colombo law courts – snatched from prison guards bringing him for a bail application. Five of the 32 escaped but seven bodies have been found, including a woman in her 60s. The other 20 have simply vanished.

The witnessed disappearances include the case of two young activists, Lalith Weeraraj – half Sinhala and half Tamil – and a Tamil, Kugan Muruganathan. They spent 2011 organising a number of demonstrations, bringing to Colombo people from the former war zone whose family members disappeared as the war ended – mostly, they claim, at the hands of the security forces.

In a sinister development in December, Lalith and Kugan themselves vanished in northern Sri Lanka, seemingly abducted as they prepared another demonstration.

All sorts of people are disappearing, but many of them appear to have been at loggerheads with the authorities.

As well as human rights workers and ordinary businessmen, those who have disappeared include some accused of being part of organised crime networks or the so-called "underworld".

Campaigners are privately pointing the finger at pro-government forces and security personnel. But the government and security forces deny being responsible for disappearances.

In fact the police spokesman, Superintendent Ajith Rohana, says special police teams have been deployed to investigate them.

"There are abductions. It happens. But generally we are conducting investigations into the matter," he told me.

I put it to him that, in effect, death squads are operating in Sri Lanka despite the end of the war.

Meanwhile, the disappearances continue. At least one more person, a Colombo restaurateur, disappeared this week.

Mr Prabagaran was a successful businessman with an electronics business based in a well-known Colombo mall, Majestic City.

In 2009, he was picked up by police when his name was found in the phone of an army officer accused of links with the Tamil Tigers. He denies any links.

In a report by the Judicial Medical Officer in October 2009, Mr Prabagaran said he had been beaten with a pole all over his body, stripped naked, assaulted on his genitals, immersed up to his neck in a barrel, had his fingernails removed and more.

‘Law of the jungle’

One of the few parliamentarians who regularly speaks out on human rights issues is Jayalath Jayawardana of the opposition United National Party.

"The human rights situation in Sri Lanka is deteriorating day by day and there is no rule of law in this country," he told me at his office in Colombo.

"Jungle law is prevailing… Without the protection or blessings of the government in power or the security forces these type of things cannot take place," he said.

And recent days have seen some unexpectedly revealing remarks from within the government.

An unnamed senior police officer in Colombo told a Sinhala-language newspaper that, as a precaution against possible street protests, "we have arranged to bring tear gas, and we have plenty of white vans in Sri Lanka".

And a cabinet minister, Vasudeva Nanayakkara, told the same paper: "The government should answer for this [missing people]. They can’t say we don’t know about it."

He said the military was getting excessively involved in civil affairs, stopping the country from being democratic and inviting international criticism.

Unusually, last Saturday a man publicly said he had foiled an attempt to abduct him – just weeks after his own brother disappeared.

With the help of a crowd the intended victim, the mayor of a Colombo suburb, Ravindra Udayashantha, confronted the would-be abductors who were in a white van. They were soldiers.

The military denied plans to kidnap anyone.