“There is hardly any Indian who supports the division of Sri Lanka as a fringe of Tamil fanatics demand,” said Punjab-born, Indian journalist turned diplomat and politician, Kuldip Nayar, writing to Colombo’s The Island on Wednesday. Assuring Colombo that despite its China-Pakistan intimacy, India will not change its helping friendship, Nayar wants Rajapaksa to present his case to the India society, by means like press conferences in New Delhi, as presently he is not seen in good light. Some days ago, a Tamil media in Chennai lamented that the case of Eezham Tamils is not known in India beyond Tamil Nadu. Unless Tamil Nadu has the guts to tell in ways heard in the rest of India that genocide-affected Eezham Tamils can’t survive without independence, Nayars would continue with their deception, said a Tamil politician in the island.

Further comments from the Tamil politician in the island: 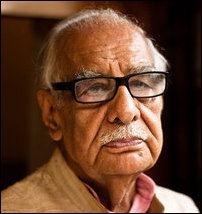 From New Delhi’s academics like Romila Thapar to veteran journalists like Kuldip Nayar of the old generation, practice the policy of appeasement with the genocidal state of Sri Lanka for several decades now, thinking that it is beneficial for the imperial, strategic and corporate interests of India.

It is exactly this policy that gives the guarantee to Sri Lanka’s continued genocidal polity. The Indian policy of the said generation never brought in any positive results other than escalating the crisis in the island at every stage.

To serve Indian imperial interests the Eezham Tamils have been sacrificed for ages.

Had the decades-long plight of Eezham Tamil been the situation of somebody else in some other part of the world, New Delhi’s intellectuals and journalists would have sung a different song, as they did in the context of Africa and West Asia.

There is another chronic section in South India that is simply paranoid of Eezham Tamils getting a country, but more than attending to this section, Tamil Nadu has to take care of the Stalinist minds in New Delhi.

If they are so sure that independence of Eezham Tamils is a demand of a fringe of Tamil fanatics, even after seeing decades of democratic mandate culminating into the endorsement of Vaddukkoaddai Resolution in 1976, and subsequent electoral politics of Eezham Tamils despite the genocidal gag on their voices, then why the people like Kuldip Nayar don’t call for a referendum to see who are the fanatics and who are in the fringe.

If the message doesn’t go in appropriately powerful ways, the generation of Nayars would continue with their deception rather than conceding to their failures.

“The reaction in Tamil Nadu has been hostile, primarily because of ethnic considerations. But New Delhi has been mature enough to view the situation more objectively. Yet this has given the impression as if the Manmohan Singh government is indifferent,” Kuldip Nayar wrote in an assuring tone to Sri Lanka, pleading that it should give some concessions to Tamils.

“The Tamils, living mostly in the northern part of the country, were critical of what the LTTE did and its chief Prabhakaran was not their hero because he brought them misery and indignities which the Sinhalese government heaped on them […] Most of Tamils kept away from Prabhakaran lest the government should wreak its vengeance on them. Still it did,” Kuldip Nayar said in continuing with his pleading.

Nayar has to explain that if most of the Tamils didn’t support the basic stand of the LTTE then how was it able to become so powerful without the support of any state, yet challenging all the powers in the world on the question of a nation without state – a universal ideological question the powers manipulate suiting their conveniences, but in the context of Eezham Tamils ditched by all of them.

Kuldip Nayar was harping on the stale themes like, refugees to India, majority-minority compromise when the context is genocide and a federal structure when Colombo is not prepared to devolve power even under a unitary system that is now pleaded by the US.

“Those who follow the events in Sri Lanka are worried over the influx of refugees from Sri Lanka […] The Sinhalese are in a majority and Tamils in a minority. Yet, together, they constitute the nation […] A federal structure is what is needed in Sri Lanka so that North has a feeling that it is as much part of the country as other areas are,” Nayar wrote.

The Americans and Indians have now conveniently forgotten about the Eastern part of the country of Eezham Tamils.

“Colombo does not have to change Rajapaksa but must put pressure to change his style of governance, dynastic and dictatorial,” the journalist said, advising Rajapaksa to have a frank discussion with experts and think tanks in addition to holding press conferences in New Delhi to clear his image.

Rajapaksa has been regularly doing that through The Hindu.

The genre of Kuldip Nayar-The Hindu journalism in India is fully aware of what is the reality in the island and what they are writing.

Kuldip Nayar was born in 1923 at Sialkot in the undivided Punjab of British India. As a veteran journalist in English and Urdu, he served long as a left-wing political commentator. He was India’s High Commissioner for the UK in the 1990s and became a nominated parliamentarian at the Rajya Sabha in 1997.