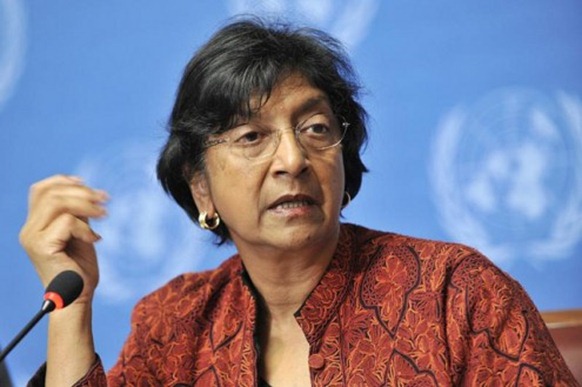 The UN High Commissioner for Human Rights Navi Pillay says she is ready to visit Sri Lanka but her office is yet to fix a date.

Responding to a question posed by Tamil human rights activist S. V. Kirubaharan during the 19th session of the UN Human Rights Council, Pillay confirmed that the Sri Lankan government has invited her to visit the country, sources at the session told the Colombo Gazette.

She said that she had received the invitation prior to the commencement of the UN Human Rights Council session last month.

Pillay however said that before she embarks on her visit to Sri Lanka she will send a delegation from her office.

Meanwhile a heated argument took place during one of the side meetings at the council in Geneva yesterday when Sri Lanka was discussed.

A delegation from Sri Lanka which included Lakbima Editor Rajpal Abeynaike questioned why atrocities committed by the LTTE during the war were not being addressed.

However some participants at the meeting raised strong objections at the tone of which Abeynaike spoke.

Sri Lanka is expected to lose a key vote on a U.S sponsored resolution which is to be submitted either tomorrow or Thursday.

A draft resolution has already been submitted to the council but the final document is expected to include some amendments.

The Indian government has already said it may vote in favor of the resolution, a move the U.S based Human Rights Watch welcomed.

“The Indian government has done the right thing by analyzing each situation separately instead of a knee jerk response against a country-specific resolution. The Sri Lanka resolution is a positive step towards encouraging a credible domestic effort in ensuring accountability, Human Rights Watch South Asia Director, Meenakshi Ganguly told the Colombo Gazette in an email. (www.colombogazette.com)