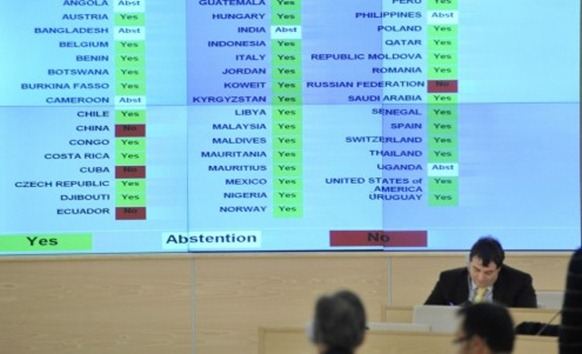 Sri Lanka will brace itself for the vote on the U.S sponsored resolution at the UN Human Rights Council (UNHRC) today.

The vote is to be taken this morning Geneva time but may get put off for tomorrow if countries want more time to lobby support for or against the resolution.

The vote is under item 4 of the Agenda today and if adopted it would most likely see Sri Lanka being given a deadline to implement the recommendations of the Lessons Learned and Reconciliation Commission (LLRC) and report back to the UNHRC.

Sam Zarifi, Amnesty International’s Asia-Pacific Director said he was surprised at the hostile government reaction to the resolution.

Zarifi noted that the resolution is mild and only seeks a commitment from the government to implement the recommendations of the LLRC.

Asked on how the final vote on the resolution is likely to go Zarifi said he was not in a position to make any predictions but noted that all the countries were taking it very seriously.

The government says, in principle, it is against a resolution being put forward against any country and that the process of addressing country specific human rights situations should be done only at the Universal Periodic Review at the Council.

Zarifi however does not agree and he says the UN Human Rights Council has the mandate to address the human rights situation of a country by adopting a resolution during its regular sessions.

Meanwhile state run ITN has begun a campaign targeting some journalists both here and in exile claiming they are working against the country.