At the time of writing, the outcome of the voting on the US sponsored resolution at the UNHRC is not known but I can’t expect a Sunday paper to hang on till Friday morning for my copy. I have heard that the Indian Prime Minister has made a statement tilting in favour of the resolution and that Nigeria is a co-sponsor, thus splitting the African block. Reading the leaves it seems that the resolution will be carried comfortably, or defeated by a small margin. In either case, the lessons and proposals in the remainder of this article remain unchanged.

The first point that I must re-emphasize is that this is a resolution adopted, or nearly adopted, by the international community against Lanka’s sibling regime; it is not aimed against this country. It is no more against Lanka than a statement condemning the Burmese military junta could be construed as condemnation of the people of Burma. I live right here in this country; so do millions of others; how is it against our interests if pressure is applied to respect democratic rights and bring to a halt the violation of human rights? It is not against us, it is in our favour – Sinhalese, Tamil and Muslim.

Whatever the outcome of the voting Sri Lanka’s Rajapaksa regime (hereafter regime) came in for a hammering, both inside and outside the Geneva conference hall. The regime spent hundreds of millions of rupees (yes, that is correct) sending a bloated delegation, paying for accompanying journalists, and dispatching teams to the four corners of the earth. So it knew how blemished its record was and had good reason to panic! The cock that crows “You can’t fool all the people, etc” has come home well and truly to roost. We have learnt this lesson, so what comes next? 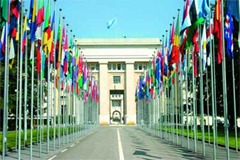 Let me be clear; I do not support extra constitutional or unlawful change of the government for reasons I will explain at the end. The changes that we the people should demand are within and by constitutional means. To put it another way, I accept that Mahinda Rajapaksa will remain president till the end of his term of office and I accept that parliament and its UPFA majority will continue to the end unless lawfully dissolved on a prior date.

So what am I talking about? Structures, personages and arrangements within the arms of state and government have to be overhauled if public and international anger is not to boil over. Spring cleaning has to begin with the defence authorities because the devastating attacks on the regime in Geneva and at home have been on HR issues, white vans, abductions, and assassinations. It is no longer any use saying, “Please stop this or that;” it is time to say, “Make a change of personnel from the top down, or nothing will get done.” The President of the Republic has power and authority of office to do so. He is unlikely to acquiesce, but the point remains that the stage when the public said, “Do this or that” has passed and it is time to say, “Restructure and change personages.” Extrajudicial lawlessness will continue, and we will never get to the bottom of the Trinco student killings, the 17 aid workers massacre, Lasantha Wickrematunge,  Prageeth Ekneligoda, and a spate of such murders, unless the authorities in charge of the defence establishment are overhauled. That’s the plain truth, and until and unless a deep overhaul such as this is done, respect for human rights will not be restored and accountability issues will remain in limbo.

Let me pick more examples of changes that the regime can undertake if it is sensible and sensitive to the lessons learnt in Geneva and it wishes reconciliation with the rest of the world. The checklist I have prepared deals with rights issues only, that is non-economic and non good governance topics. This is because the focus in this piece is to pick up matters that flow from the Geneva sessions (whichever way the voting went) which were about rights.

Get the drug lords and their politi-cal patrons behind bars

Demilitarize the north and the east and return all FTZ lands

Get the military out of economic and civilian life, everywhere

Find out why the judiciary is kow-towing and stop it

That’s a big list if all this can be done. Most, like the proposals for spring cleaning the defence establishment are predicated on structural and personnel changes such as firing ministers, reorganizing and setting up new modes of transparency. It’s a tall order and the president will ignore it; I have no illusions about that, but I am writing for the public. The media can help if it sprouts a backbone and overcome its ingratiating predilection to self-censorship when dealing with the regime.

There is a breakdown of law and order in the country like we have never seen before. Drug lords run around with impunity bestowed on them by government party political patrons; it’s hair-raising. The judiciary is cowed by the political establishment. The court’s rulings on the 18th Amendment and the takeover of 35 enterprises disillusioned even the dispirited. In a nutshell this is not a conjuncture of high public consciousness and revolutionary fervour; quite the contrary, this is the low tide. So let’s stay within the law and not open the floodgates to hooligans.