The third VV – Vipaksaye Virodhaya – the protest of the opposition took place in Hatton town on 14 March. Thousands turned up, shouting slogans and braving the rain. I was greeted with cheers and waves at each junction we passed, as we went to Hatton from Colombo. A few years back on such a journey I faced silent and sullen people who probably murmured ‘traitor’, fooled by the Mahinda Chinthanaya. Ranil, Mano, Siri, Manamendra and other leaders participated, though there was sabotage by the pro government organizations. There was a strange electricity failure. Police were controlling the traffic from morning. The indirect advice was clear “go home and avoid trouble”.  In spite of all that, VV3 was a success. I made the following speech and it was well received.

Protest of the opposition

“We came here together, to participate in the Vipaksaye Virodhaya, the protest of the opposition. We demand the government to bring down the prices of kerosene, diesel and petrol. We demand that the prices of all essential commodities should be brought down immediately and the wages should be raised according to the rising cost of living. Government excuses for the price hikes are bogus and false. The Mahinda regime is totally responsible for this miserable condition. This situation was created by the policies of the government. Mahinda went into a series of agreements with the global powers. The defence treaty, economic agreements and IMF conditions, have tied the country to global capital. This is surrendering to imperialism. Under obligation to imperialism, Mahinda devalued the rupee, and slashed subsidies and welfare to the poor. More steps will be taken in the coming period. The money borrowed from global capital was spent in the most irresponsible manner. About 25% was pocketed while another in that order was wasted in the process. The rest, 50%, was used for projects that are really  meant for foreign investors who are yet to come. No income has been generated so far and the money lenders are blowing hot air from behind. Mahinda took steps to burden the poor following the instructions of the imperialist masters. He has become a loyal slave of the global masters. His policy  is to squeeze the workers, peasants and fishers through super exploitation and to rob and plunder the local capitalists and business people – all for pay backs to the masters. 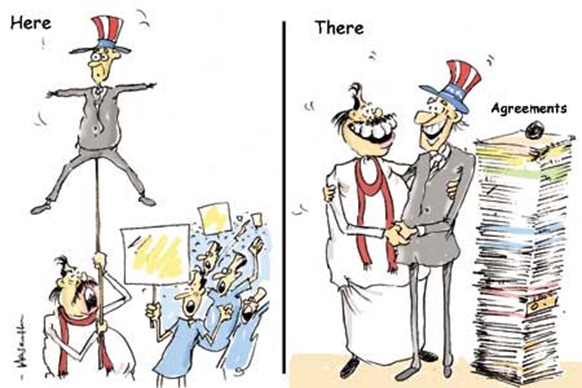 When the masses protest and come to the streets to plead for relief and higher wages, Mahinda uses state terror ruthlessly. Already he has killed workers and fishers by attacking mass protests. We cannot forget Rosen the worker and Anthony the fisherman, who sacrificed their lives for the struggle. There are hundreds who are injured. White vans operate throughout the country abducting people. Many returned as dead bodies.  Even regional political leaders of the ruling party face the threat of abduction and death by the terrorist units of the Mahinda regime. Who threatened the mayor of Negombo, the mayor of Kolonnawa and who killed presidential adviser Bharata Luxman? The person who pulls the trigger is irrelevant. The killer is the Mahinda regime. This regime killed over 150,000 in the north. It has turned its guns against the protesting masses in the south. Our country is becoming a massive cemetery.                We must come out and campaign against the repression. We demand the release of all political prisoners including General Fonseka. In the coming period prisons will be  filled with protesting masses.

While performing all duties of a loyal vassal of imperialist masters, he is complaining of imperialist actions against him. He says that American imperialists are pulling his ears. While throttling us with economic burdens and state terror he wants our support at this moment. Whether Americans or Riri yakkas attack him how could the oppressed masses show any concern to the oppressor? On the other hand, he himself opened the door for the imperialists to intervene here. Land, water, minerals, and marine resources were given to these masters. Even the local investors are disregarded. He became a bonded salve to theses forces. These masters who pushed him to war are now raising questions about war crimes and human rights. What can the suffering masses say? Even if the devil intervenes to get some relief, stop abductions, stop state terrorism, and give freedom to Tamils, people will be happy. We press for the implementation of the LLRC recommendations.