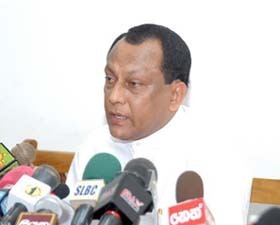 Sri Lanka on Saturday warned India of possible repercussions over Kashmir after it voted for a US resolution in Geneva on rights abuses during its war on the Tamil Tigers.

Government spokesman Lakshman Yapa Abeywardena said some countries or groups might use the vote on Sri Lanka as precedence to bring a similar resolution on India over the Kashmir dispute, Xinhua reported.

Sri Lanka was, however, mindful that India acted as a result of immense pressure from Tamil political parties, Abeywardena, the acting media minister, told a public meeting.

Much to the disappointment of Colombo, India was among 24 countries which voted in support of the US sponsored resolution on Sri Lanka at the UN Human Rights Council (UNHRC) on Thursday.

President Mahinda Rajapaksa has warned that countries which voted for the resolution would have to worry about consequences of terrorism.

Lankapage.com quoted Rajapaksa as saying that "no external forces will be allowed to threaten the country’s sovereignty".

Speaking on Friday, he vowed to continue his government’s development and reconciliation programmes in the island’s northeastern region that was the former war zone.

He asked people not to fall "prey to conspirators, opportunists and traitors".

The President commended the 15 countries which voted against "the anti-Lanka resolution for their support" and the eight nations which abstained in the 47-member UNHRC.

Countries which voted against Sri Lanka would have to be concerned about consequences, he was quoted as saying.

But Minister Maithreepala Sirisena pointed out that the resolution was passed with the amendments added by India to safeguard Sri Lanka from "the interferences of UN bodies".

These amendments ensured that no intrusions can be imposed without the consent of the government, he added.

India forced the US to amend its resolution to safeguard Sri Lanka from international intrusions by adding a clause that said the UNHRC can provide advice and technical assistance "in consultation with, and with the concurrence of, the government of Sri Lanka".

Sri Lanka has mainly downplayed India’s support to the resolution, saying New Delhi gave in to pressures from its coalition partners in Tamil Nadu who have been traditionally ranged against Colombo.

Another minister, Dullas Alahapperuma, urged the Sri Lankan public not to hate India for supporting the resolution.

Although India had gone the extra mile to make the resolution less "intrusive", New Delhi’s siding with the West against an ally which stands by India in every platform "is seen as a betrayal", he said.