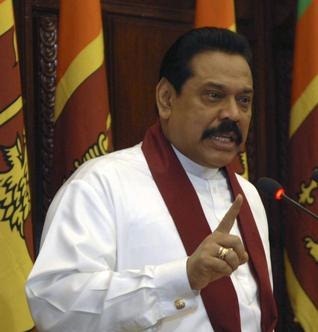 In his first comments after a resolution against Sri Lanka was adopted at the United Nations Human Rights Council in Geneva, President Mahinda Rajapaksa balanced the need to play to the gallery with the compulsions of on-the-ground realities. While asserting that Sri Lanka would not tolerate any arbitrary interference in its affairs, he refrained from singling out countries that had supported the resolution.

It was abundantly clear that Mr. Rajapaksa had taken a considered view of the whole issue of the Indian support to the resolution, bearing in mind that India had got the clause on frequent reporting to the UNHRC deleted, apart from amending the Trojan clause on technical assistance. While thanking the countries that voted against the resolution or abstained, Mr. Rajapaksa refused to make oblique references to India, as his Foreign Minister G.L. Peiris had done soon after the vote in Geneva.

In a speech that was aimed at making clear where his party, the SLFP and the government stood on the issue, Mr. Rajapaksa caught on to the nebulous, all encompassing concept of people’s welfare constituting the heart of his government’s policies. “The government’s policy in respect of all matters will continue to be guided by the vital interests and well being of the people,” the Daily News newspaper quoted him as saying at a function on Friday.

Contending that the vote in Geneva “would please the LTTE proxies and the diaspora but not the people of Sri Lanka” he said that people had sought, when his government came to power in 2005, the establishment of freedom and honourable peace. And, the government had delivered on that promise. Reports reaching Colombo did not have details if the President mentioned that the people re-imposed their faith in him in the elections soon after the victory against the Tamil Tigers in May 2009.

Claiming that the government had done a lot “in a very short span without succumbing to pressure or influences,” he contended that “some elements were blind to this impressive progress in all sectors as their eyes were clouded by jealousy, hatred and petty interest.” In an oblique reference to the Human Rights activists who had campaigned in Geneva, he asked: “To whom are they trying to send this message and for whose benefit are they working at such a crucial time for the country?”

While insisting that Sri Lanka would continue to seek domestic remedies for its issues, he did not elaborate if this meant that he would hasten the implementation of the Lessons Learnt and Reconciliation Commission Report, a home-grown solution for the problems faced by Tamils of the North. “Whatever the challenges we would not allow the ugly head of terrorism to re-surface,” he said.

Minister Champika Ramawaka, belonging to the Jathika Hela Urumaya, criticised India for the vote. He wanted the government not to give any economic or other concessions to India. A few other Ministers, expressed their anguish over India voting with the U.S., especially when Bangladesh and Maldives voted with Sri Lanka.