Sri Lanka has rejected a UN resolution urging it to seek external help in probing alleged war crimes committed during an offensive against Tamil Tiger rebels nearly three years ago.

Acting Foreign Minister Dew Gunasekera told parliament on Friday that Sri Lanka will resist outside help to investigate violations of humanitarian law, a key demand in the US-initiated Human Rights Council resolution from Geneva on Thursday. 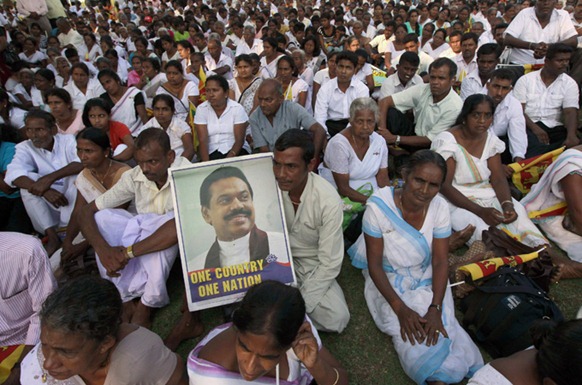 Sri Lankans gathered on Thursday to oppose a UN-proposed probe of abuses, saying it can be handled locally [Reuters]

"We will not, under any circumstances, allow others to impose on us their advice or solution," Gunasekera said, referring to the resolution.

Rights groups have said that up to 40,000 civilians were killed by troops in the final stages of fighting which ended in May 2009.

"It is the government of Sri Lanka which is best placed in evolving a home-grown solution acceptable to all the citizens of the country," he said.

"We will therefore not entertain alien quick-fixes."

The UNHRC resolution urged Sri Lanka to probe war crimes, implement the recommendations of a domestic inquiry into the war and seek UN help for reconciliation efforts with its minority ethnic Tamil community.

There has been "an unprecedented and totally unacceptable level of threats, harassment and intimidation directed at Sri Lankan activists" before the vote, he said, and "there must be no reprisals".

Sri Lanka’s media reacted bitterly on Friday to the resolution and said that the island had done well to go down fighting in Geneva.

The state-run Daily News said the 24 nations which voted in favour of the resolution urging a credible investigation were being destructive.

These countries were making "a desperate attempt to disempower and undermine Sri Lanka and they are trying every trick in the bag to further this dark design," the Daily News said.

The privately-run but pro-government Island newspaper commended the hawkish administration of President Mahinda Rajapakse for putting up a fight in Geneva.

"The cornered badger bravely fought the mastiffs of neo-imperialism, savage in the fray, and went down fighting yesterday," the Island said. "It certainly was a defeat as good as victory."

Tabling the resolution, the US said Colombo had been given three years to hold its own probe into allegations of war crimes, but "given the lack of action… it is appropriate" that the 47-member UNHRC pushed it to do so.

Colombo has denied its troops were responsible for any non-combatant deaths, but UN-mandated experts have accused the Sri Lankan military of killing most of the civilian victims in their final offensive against the rebels in 2009.