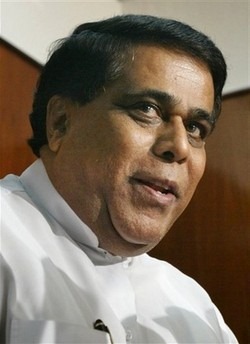 The government says it will not fully implement the recommendations of the Lessons Learned and Reconciliation Commission (LLRC) despite the resolution adopted by the UN Human Rights Council (UNHRC).

Addressing the media, government Minister Nimal Siripala de Silva said that the government does not see the LLRC report as being a “Bible” despite the commission being appointed by the government itself.

He said that the commission, in formulating its recommendations, had in some instances gone beyond its mandate and as a result the government must now decide what to accept and what not to accept.

The UN Human Rights Council had last week adopted a resolution by a majority vote, calling for the full implementation of the LLRC report.

However de Silva said that the government has a duty to look at the repercussions implementing the full report may have on the country plus it also needs to form a consensus among its coalition partners.

President Mahinda Rajapaksa appointed the LLRC soon after a 30 year war between the army and the LTTE came to an end in 2009 with the defeat of the rebels.

However Sri Lanka’s External Affairs Minister G.L Peiris said at the same press briefing that the government will not let foreign governments dictate to or direct the island nation on its domestic issues.

Sri Lanka also rejected calls to hold a referendum among the Sri Lankan public on the vote taken at the UN Human Rights Council.