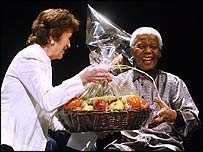 A group of world leaders formed by Nelson Mandela has urged Sri Lanka to try and avoid another showdown in the UN Human Rights Council (UNHRC) by adhering to the recent resolution adopted by the body.

Saying that the "quite mild resolution" was not a Western sponsored one, Ms Robinson insisted that it was not an attempt to "do down a country."

"We were particularly encouraged that large countries like India and Nigeria supported the resolution".

The resolution adopted by majority vote last week in Geneva called on Sri Lanka government to implement the recommendations of Lessons Learnt and Reconciliation Commission (LLRC).

It is advisable for Sri Lanka, she said, to adhere to the resolution in order not to "come under the radars of UNHRC once again next year," stressing that it is the responsibility of the government of any country to protect civilians, though LTTE is also responsible for gross human rights violations.

"It is in the interest of Sri Lanka to accept that the majority of governments feel that Sri Lanka must do more for reconciliation," said Ms Robinson.

Mary Robinson admitted that not only many countries that supported the resolution, India and United States among them, supported Sri Lanka government’s war against the LTTE, but also provided Sri Lanka with arms.

"The elders are unequivocally worried about the extent of the arms race. Generally the supply of weapons that are causing such destructions the money that spent on weapons, the trafficking in weapons,"she said.