During a parliamentary interpolation seeking to know Norway’s stand on independent international investigations of Sri Lanka’s war crimes and crimes against humanity, when Conservative MP Peter Skovholt Gitmark asked the Norwegian Foreign Minister Jonas Gahr-Støre on Monday, whether Norway would back such an investigation, the minister answering a clear “yes,” later stopped at only “independent investigations,” dropping the international part. On political solutions, the foreign minister was harping on the 13 Amendment failed for 25 years, backtracking even from the constitutional experiments envisaged by the so-called Oslo Declaration. After playing with the lives of thousands, Norway now plays with words escaping from spelling out international investigations and leaves Eezham Tamils subjugated by unitary and genocidal Sri Lanka, commented diaspora activists.

Norway was a co-sponsor of the US-tabled resolution at the UNHRC that bailed out Sri Lanka from international investigations and bound Eezham Tamils to Sri Lanka’s LLRC recommendations that envisage annihilation of the nation of Eezham Tamils and confine solutions to existing Provincial Councils of the unitary constitution.

The section of Tamil politicians and diaspora activists that hailed the US-resolution as a ‘first step’ and a great ‘diplomatic’ victory should have foreseen for what it was the first step, new generation Eezham Tamil political circles in the island and in the diaspora commented responding to Norwegian foreign minister’s stand. 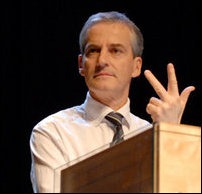 He was particular in saying that in addition to implementing the LLRC the Sri Lankan government should go the additional step of initiating an independent investigation.

For all practical purposes, the minister’s vision of depending on the accused for investigations negates all possibilities of any justice coming to Tamils in near future.

On political solution, the minister who didn’t recognize Eezham Tamils as a nation, but addressed them as “minorities,” said that the fundamentals for a political solution were well established in the 13th Amendment of a united Sri Lanka.

Political observers view the minister’s stand of defending what is already there in the constitution as an escape from responsibilities of bringing in any constitutional changes in the unitary structure of state in the island.

Conceding to the military ‘victory’ of genocidal Sri Lanka, Norway is washing its hands of even its earlier stand seen in facilitating Oslo Declaration, after taking Eezham Tamils for a ride, the observers further said.

The Provincial Councils (PC) created under the 13th Amendment of the unitary constitution, have proved a miserable failure in the last 25 years.

Even in the provinces outside of the Tamil homeland in the North and East, where the PCs were regularly elected, the Tamils were not treated with equality or with self-respect.

The Norwegian Foreign Minister was telling on Monday that the “minority” issue still exists and is not resolved because [in the past] the parties chose weapons and not politics.

Does he imply it was the LTTE and its armed struggle that were all these years blocking the success of the 13th Amendment, Eezham Tamil political circles ask.

If so, whether it was for the sake of implementing the 13th Amendment the genocide was committed, they further asked, commenting on the futility of talking on the 13th Amendment to a genocide-affected nation, that too, after seeing the day-to-day attitude of the Sinhala nation clearly demonstrated in every respect.

The Norway FM in the parliament was explaining the ‘positive’ aspects of the LLRC recommendations. The vast majority of the IDPs are out of the camps, he said, adding that a wide-scale reconstruction is taking place in the country.

Other than international investigation and political solution appropriate to the national question – the two issues of real importance to Eezham Tamils – the Norway FM came out hard on Colombo government on issues such as media freedom.

The approach perhaps harps only on a regime change and not on fundamental solutions to the structural crisis of nations in the island, political observers in the diaspora said.

The minister was referring to Sri Lanka’s need to report to the UNHRC in next March.

He was not elucidating on what the next step would be, but he was harping on Norway’s continued prospects of bilateral relationship with Sri Lanka.

Last year, the former International Development Minister Erik Solheim has claimed that it was inside the Norwegian Foreign Ministry one could locate comprehensive knowledge and expertise about Sri Lanka.

If that is the case, the Norwegian Foreign Minister should be knowing the real situation on the ground – plight of the so-called resettled, plight of the released LTTE cadres, militarisation, land appropriation, colonisation, Sinhalicisation, day-to-day rights violations of Tamils, on-going structural genocide and attitudinal impossibility of political solution without secession – but none of it is reflected in his speech, Eezham Tamil activists in Norway said.

Conservative parliamentarian Gitmark, who initiated the parliamentary interpolation and questioned the FM, said the Rajapaksa regime was solely responsible for the misconduct. He cited the UNSG report.

The SL government delegation in Geneva in its attacks didn’t spare even the human rights activists and journalists, the MP said.

Both the LLRC report and Sri Lanka’s National Action Plan for the Protection and Promotion of Human Rights (2011-2016) are documents only showcasing to the international community in order to deal with issues at a domestic level, Gitmark said.

Citing on torture in Sri Lanka, and evidences available with UN Committee Against Torture (CAT), the MP said Sri Lanka’s National Action Plan is a bluff. He underlined the need for Colombo to come out with the names of the detainees.

He also wanted the UNSG report to be concretely followed.

The Conservative MP was specific on international investigations:

“I have no trust, not at all, that Rajapaksa and his government would do anything to really investigate themselves or those close to them and to punish them for grave violations in connection with the war-crimes or human rights. Therefore, I am of the opinion that Norway and the international community should seek broader support to appoint a international criminal tribunal on Sri Lanka,” the Conservative MP said.

He also added that the most important demand on the Sri Lanka should be a negotiated political settlement to the conflict. “Without political negotiations, compromises and agreements, the conflict would last. It is the responsibility of the SL President and his government. International pressure needs to be exerted on this front,” he said.

Mr. Gitmark also implied that the international community should woo the support of China to make it possible.

The FrP MP, Karin S. Woldseth referred to a meeting she had with the Norwegian Tamil representatives together with the Global Tamil Forum and said the picture she got about the happenings in the island was not positive. She was particular on the plight of the children without parents and the traumatized and wounded victims.

Dagfinn Høybråten of the KrF said that the leadership of the Tamil Tigers made a “fatal mistake when they overturned the Tamil political struggle for justice into a military struggle for a separate state. The result was a crushing defeat, to which the Tamils had to pay the highest price for.”

Mr. Dagfinn further said: “We do not need more of triumphant chauvinism of those who won the war militarily. We do not need reshaping of conflict by the bitter Tamil activists who choose to dream about resuming a military struggle for separate Tamil state.”

The Christian Democratic Party parliamentarian should think of Norway getting separated from Sweden and Denmark, even when there was no genocide, Eezham Tamil diaspora activists commented.

Nearly all the parliamentarians, including the Norwegian FM, commended the integration of Tamils in Norway as an impressive model. The FM cited the presence of the community in justifying Norway’s quest for bilateral relations with Sri Lanka.

This praise was only a placating stance to balance the injustice, said Tamil political activists in Norway.

It is high time the Eezham Tamils who have got the citizenship in Norway should demand the Norwegian politicians to refer to them publicly as Eezham Tamils and not as Sri Lankans. As the word Eezham in Tamil stands for the entire island, no Tamil from the island will be left out or excluded in claiming the identity. It will only reject the identity of the genocidal state that has the identity Sri Lanka since 1972.

Such a move by the Eezham Tamils in Norway would at least prevent Norwegian politicians seeking state-to-state relations of their interest while ignoring Eezham Tamil aspirations, from citing a ‘large community of Sri Lankans’ in Norway in support of their dealings.