(Dr Vickramabahu Karunaratne) From the 83 riots, the Lankan state had to struggle in the international arena to justify the suppression of  the Tamil insurrection. At that stage there was public sympathy in India and in most of the Western democracies to the Tamil cause, and the Sinhala were always perceived as the oppressors. In fact India armed and extended training facilities to Tamil militant groups while the left or liberal Europeans and North Americans had their sympathies with the Tamil cause and funds were raised to finance this cause.

Even during the deliberations leading up to the listing of the LTTE as a terrorist organisation in the western countries, liberal officials and politicians objected to so listing the LTTE, as they perceived it as a liberation organisation.  Consequently interventions by the leaders of India and Lanka ensured that the LTTE was on the list. Lanka and India put forward the view that Tamil liberation should be separated from the terror campaign. Both claimed that terrorism should be eliminated by armed repression while the liberation aspect should be dealt with a political solution. 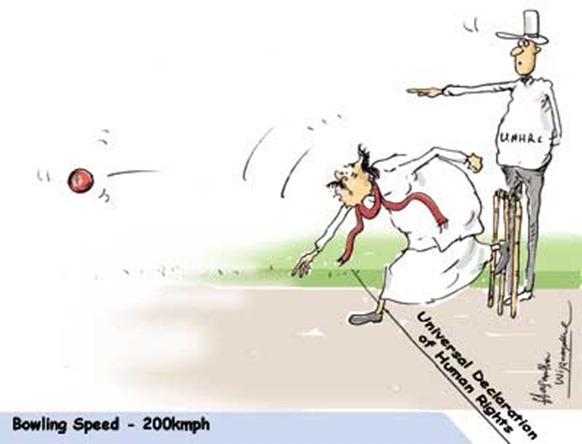 A deliberate and orchestrated strategy was pursued by the Lankan state to “brand” the LTTE as a terrorist organisation. The LTTE countered and projected itself as a liberation organisation. The Lankan state won this contest as the international community under the pressure of India, listed the LTTE as a terrorist organisation.  But most of Lanka’s senior diplomats and pro government intellectuals maintained that the moral high ground of the Tamil cause was unassailable, and the new concept of “terrorism” only provided Lanka with a temporary respite.  Except chauvinists such as Nalin and Gunadasa, every body knew that at some point Lanka would have to address the issues of the Tamil cause. However, majority of the Sinhala population got carried away by the Mahinda Chinthanaya propaganda, and failed to appreciate the underlying issues relating to the Tamil cause and the validity of the right of self determination of the Tamil people. Mahinda claimed that the war was won by Lankans, without foreign assistance. But at the UNHRC, during the debate of the US backed resolution against Lanka, the Cuban delegate while supporting Lanka stated that 40% of the value of Lankan arms purchases was from the United States, the United Kingdom and Israel! Although the North Americans, the Europeans and India assisted and encouraged Lanka in its war against Tamil insurgency, the left and liberal forces in these countries had their sympathies with the Tamil cause. This political aspect has always been consistent, which led to millions of Tamil citizens fleeing Lanka to these countries.

Thus the assistance, political and military, extended to Lanka by North America, the European Union and India was not unconditional. There was the unwritten understanding between Lanka and global powers that after defeating the “terrorists”, the issue of the Tamil national problem will be addressed. After the end of the war, the world powers waited for some form of bourgeois balance to be introduced, but Mahinda was drifting.

Mahinda regime in Colombo thought that by concentrating on infrastructure development, the underlying issues of the national problem will fade away. However, it is a fundamental problem of democracy  and cannot be swept under the carpet. This reality was shown to the leaders by rational advisers but members of the Mahinda regime frequently labelled dissenting voices as “traitors”. That means even liberals who state, sovereignty must entail a government exercising its authority to uphold the rule of law, are traitors. With the resolution passed Mahinda regime is devalued in the international arena. Resolution does not have much power but it is a resolution of shame to Lanka. There is a huge credibility issue with the Mahinda presidency. No one believes them any more.

But Tamils expected much more from global powers. They expected a war tribunal and serious constitutional changes through foreign intervention. As I said before, these are only day dreams. Justice can be achieved only by a revolutionary regime based on workers power and Tamil liberation.