In the years 1990 and 1991 Mahinda Rajapaksa, an opposition member of parliament went to the Geneva Human Rights Commission to complain against the abductions taking place under the then government of President Ranasinghe Premadasa.

He got a list of those reported missing during the bloody crack down against the JVP, from NGOs and sent it to Amnesty International. Not stopping at that Rajapaksa decided to go personally to Geneva to attend the Human Rights Council meeting to lobby for action against the Premadasa Government. 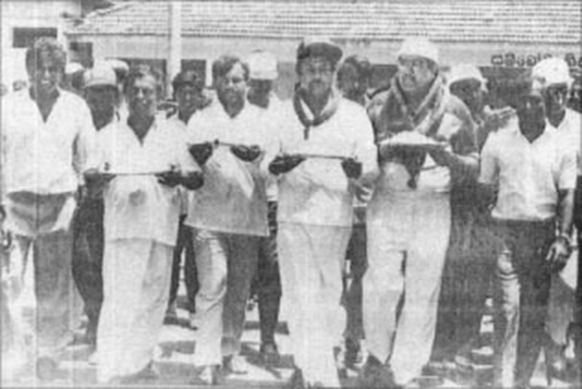 He was stopped at the airport and searched by police. The media went to town and he was allowed to proceed to Geneva by the then government. He returned with a reputation as a human rights activist.

Rajapaksa became the people’s champion that day but today he sees those going to Geneva as ‘traitors’. So, one wonders if those who are going to Geneva today are seen as traitors. Whether that  applies to Mahinda Rajapaksa as well.

The second major political move by Mahinda Rajapaksa was in 1992. He began a ‘Pada Yatra’ from Colombo to Kataragama when the then government of President Ranasinghe Premadasa was feared as much as today’s government.

The main slogan was to hold the Premadasa regime responsible for tens of thousands of people who went missing during the 1987/89 JVP uprising. The agenda also included  opposing privatization, calling for the suspention of the war and to provide a political solution to the ethnic crisis and bring down the cost of living.

A majority of the Sri Lanka Freedom Party did not back the protest march organized by Mahinda Rajapaksa. However it was the first time a large crowd had got on to the streets against the UNP regime.

No matter how oppressive the Premadasa regime was at the time, it never sent the police to stop the 19 day Pada Yatra. So tear-gas was not fired and government sponsored thugs were not used to throw stones. Even before the Pada Yatra began there was no attempt to obtain a court order against it. Police or army road blocks were not used. So Mahinda Rajapaksa could go to Kataragama without any hindrance.

The success of that Pada Yatra helped to give people confidence that even after years of fear psychosis political opposition could function once again.

With this one move  Mahinda Rajapaksa, transformed himself from a provincial leader in Belliatte to a national leader.

This year is the  20th anniversary of that Pada Yatra. It would be interesting to see whether the government would have yet another one its ‘tamashas’ to mark this politically important event for President Mahinda Rajapaksa.

That would be a telling commentary on how much President Rajapaksa has evolved from being a ‘democrat’ to a ‘dictator’.

The fact that the situation is so similar to the post-1992 era is that the same fear psychosis which Rajapaksa fought against is preailing under his administration.

More journalists like Sivaram, Lasantha Wickrematunge and Nirmala Rajan have been killed and dozens more assaulted and harassed during Rajapaksa’s administration than during the Premadasa regime.

People are being abducted in white vans in broad daylight right opposite the Courts.

Provincial Ministers and Cabinet Ministers in his government include many with allegations of criminal conduct. It is an open secret that some of the biggest drug dealers are elected members of his party.

It is ironic that under the administration of the one time human rights champion, the independence of the judiciary, the police, the media and other institutions have been undermined as never before.

For the first time in history, a Sri Lankan government is facing war crimes charges in the international arena. So, under these circumstances it would be no surprise if the 20th anniversary of the Pada Yatra will be quietly forgotten by the government.

However, it would be a golden opportunity for the opposition to take a leaf from Mahinda Rajapaksa the democrat and mark the event with a protest march from Colombo to Kataragama. The issues would be identical to those raised by Preisdent Rajapaksa 20 years ago.

The test would be whether the President would allow it or unleash the police or the under world to stop it.

The record so far is clear. Any protest whether politically motivated or spontaneous has been crushed.