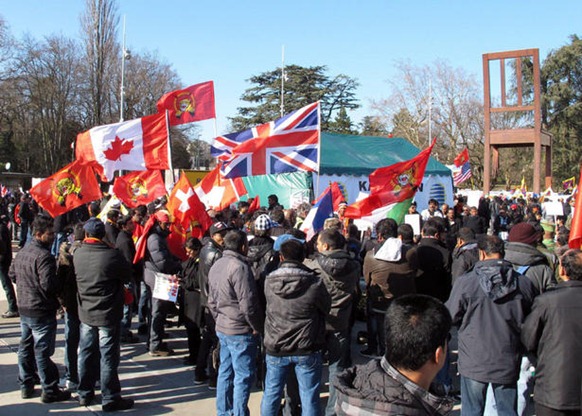 State sovereignty continues to be a shield throughout much of the world where there is a need to circumvent international law and human rights obligations. Sri Lanka is one such state and is a well-known violator of human rights. As a historic first, the United Nations Human Rights Council has taken a strong stance against the Sri Lankan state’s human rights record through a U.S.-initiated, Canada-sponsored resolution that questions the actions of the Sri Lankan government and the Liberation Tigers of Tamil Eelam during the last phases of the civil war.

The resolution specifically calls for investigations into violations of international law, extrajudicial killings and enforced disappearances. While it does not go as far as a much needed independent international investigation, it is definitely a step in the right direction.

Is it too late? What does this mean for the future of the country? Will it lead to a political solution for the Tamils in the north and east of the country? These all seem to be lingering questions. No one can conclusively state what this resolution will go on to do but the message sent last month in Geneva was strong and clear: Human rights are a state’s obligation to its people, and if the obligation cannot be met within the confines of the country’s sovereignty, the international community will take action. For now, the action is simply in the form of a resolution — for many though, there is hope that the action may come in more serious forms if Sri Lanka does not change course. Many see this as the beginning — optimism that was unseen until this form of international action.

After 30 years of civil war, the passage of a resolution that only begins to touch on the reality of the horror that plagued the island nation should have passed with ease. But it didn’t. The hurdle came in the form of member states whose top-of-mind concerns were everything but human rights. On the face of it, the defence was simple: state sovereignty. Whether to oppose the United States or to prevent international interference in their own backyards, political interests blinded states from their objective role in condemning grave human rights violations. It was against this politicized backdrop that the resolve of countries like the United States and Canada, with the support of NGOs, activists, and affected individuals who flew in from Sri Lanka and other countries, made a difference. It was their subtle but important diplomatic role that reshaped the predictable voting pattern that otherwise would have failed the people of Sri Lanka.

That is why it is more important than ever that Canada’s tough stance on Sri Lanka include a vision to collaborate further, strengthen and protect these individuals and organizations — those who proved to be the strongest allies in Geneva. They provide the most accurate picture of the situation on the ground in Sri Lanka and often faced significant barriers in their pursuit to convey the truth. That being said, the sad reality is that with the exception of a few brave souls, several human rights activists from Sri Lanka who were first-hand witnesses were unable to participate and contribute to the process. Those activists who did take part in the session did so at the risk of being portrayed as “traitors.” They braved attacks and intimidation from the Sri Lankan government. Media reports on the island effectively incited hatred among the Sri Lankan population. While these few activists courageously stood up and voiced dissent, there were many others who were terrified at the consequences of taking part in the council and returning safely to Sri Lanka.

If a state can intimidate and threaten its citizens on foreign soil in Geneva, one can only imagine what it is are capable of within its own “sovereign” borders. These are allies that need support. It is time for Canada and like-minded countries to issue calls for proposals to look at ways in which we can strengthen the role and protection of NGOs, activists and affected citizens at the Human Rights Council, for without them we may be in dire need of real allies in the future.

Vani Selvarajah is an articling student with Jackman & Associates and will be called to the Ontario Bar in June 2012. She spent the past month in Geneva on behalf of the Canadian Tamil Congress advocating for the rights of human rights defenders and the passage of the recent resolution on Sri Lanka.