As if there aren’t enough irritants that disturb the Indo-Lanka relationship, the Kudankulam nuclear issue is now creating fresh tremors that most feel can only be addressed through expected bilateral talks. The Indian media has played down the issue — after all in Tamil Nadu, Indian nationals are themselves agitating against the planned reactors.

Even so, this is the worst time at which this kind of issue should exacerbate relations between India and Sri Lanka, which were totally knocked out of kilter after the decision by the Indian government to support the adoption of the resolution concerning Sri Lanka at the UN Human Rights Council.

This week, there is also an Indian parliamentary delegation visiting the country, and this is seen as an all too needed fence-mending excercise. So far there has been no official Sri Lankan government protest on the nuclear issue, but neither has the Power and Energy Minister’s contention that the matter will be taken up in the IAEA (International Atomic Energy Agency) been so far refuted by the government.

Chandrika Kumaratunge, former president, however, was on the offensive last week  when she ventured her opinion to an Indian television station about the Geneva vote.

The gist of her submission was that India would have had good reasons to vote against Sri Lanka at the UN HRC.

How does this match-up against the story in some sections of the Indian media that Sonia Gandhi was so traumatized by seeing the photograph of an apparently bullet riddled body of the (alleged) son of the slain LTTE leader Prabhakran, that she basically wanted the Indian vote at the UNHRC to go the way it did?

It is time to blow this obvious Tiger canard out of existence, because it insults the intelligence of both Indians and Sri Lankans concerned. When it is known that India helped Sri Lanka to vanquish the LTTE, mostly because Sonia Gandhi wanted it for obvious reasons, it is abundantly clear that the LTTE would want to float the canard of this nature to indicate that finally there is no bad blood in India over the Rajiv Gandhi murder. 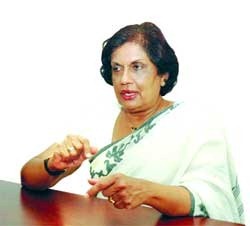 This is pathetic. Floating the story, knowing that Sonia Gandhi would not issue a denial over this kind of piffle, shows that the LTTE lobby is working overtime to buy respectability, particularly in the once-bitten Indian territory.

So that certainly is out of the way. India did not vote in Geneva because Sonia Gandhi saw a ‘bullet riddled body of Prabhakaran Jnr.’ (!)

What then could be the real reasons that were so ‘compelling’ (to quote Chandrika Kumaratunge) in making the Indians take the decision they did take, regarding Sri Lanka in Geneva?

And did the Indians wag the American tail in this entire matter – or was it the other way around?

There were varying opinions discussed at a lecture given by H. L. D. Mahindapala, one of our contributors, and a veteran commentator on Sri Lankan politics, at the Royal Asiatic Institute last week.

Those frequent commentators such as Neville Laduwahetty were of the view that the Tamil Nadu threat and the threat of defection of the state’s MPs from the government coalition, finally made up India’s mind.

But obviously Chandrika Kumaratunge, and many others who were present at the Royal Asiatic lecture (Chandrika was not) think there were other ‘compelling’ reasons for India to take the decision on Sri Lanka — having initially announced that her delegation would oppose a country specific resolution at the HRC.

If there were such reasons, it is incumbent upon the former president to state what they might be — else it looks too much as if she is playing the old political game of publicly condemning her successor out of pique.

In his lecture at the Asiatic Society, Mahindapala was of the view that the Sri Lankan government had failed to counter the propaganda of the Tamil diaspora, and this position seemed to be endorsed by a large section of the audience, some of whom were of the view that the continued use of the word ‘Diaspora’ by itself  epitomized that failure.