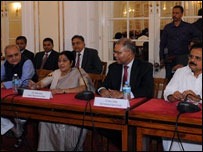 “Power devolution without power is of no use,” TNA MP Selvam Adaikkalanadan told BBC Tamil service following an hour long meeting with the Indian delegation in Colombo.

“We need police and land powers for the provincial councils like the states in India,” said MP Adaikkalanadan.

Indian MPs now touring Sri Lanka have told the TNA MPs that they would stress the need for devolution of powers to Tamil-speaking provinces when they meet President Mahinda Rajapaksa on Saturday. 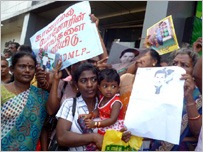 When the Lankan MPs wanted the Indians to bring pressure on their government to urge the Sri Lankan government towards a lasting solution to the Tamil national question through dialogue, the delegation said they would take due note of their concerns.

MP Adaikkalanathan said they briefed the Indian delegation on the appalling conditions prevailing in Tamil areas.

He said that heavy military presence in the North is an impediment for Tamils who are struggling get back to their normal lives after suffering during and after the Civil war which came to a brutal end with the LTTE being militarily defeated in May 2009.

“Land grabbing continues in the north and east, while Buddhist temples are being built in traditional Tamil areas,” the TNA has told the visiting the Indian delegation.

TNA members have also told the Indian MPs that the situation could be improved in the North and East for Tamils if the administration is handed over entirely to the elected officials instead of the military, so that they could live with dignity in Lanka.

That can happen only when powers relating to land and policing were devolved to the provinces, the TNA has emphasised to the Indian delegation.

TNA also has requested the visiting Indians that the tour to the north should not be a guided one.

It will enable the Indian MPs to meet the Tamil people in the north and east and get to know their problems first hand, without government minders , he added.