The Indian joint parliamentary delegation spent Tuesday listening to arguments from people on both sides of the Tamil question and exploring the way forward to achieving the legitimate aspirations of the Tamils in Sri Lanka.

While an overseas visit by an Indian Parliamentary delegation normally involves a few courtesy calls, attempts at bonhomie, and a little bit of studying the country, this particular delegation has come to represent India. Two Ministers, the Leader of the Sri Lankan Parliament, 39 MPs, representatives of the main Tamil parties — all had meetings with the delegation, and had extensive discussions on the present situation in Sri Lanka.

Sri Lankan External Affairs Minister G.L. Peiris explained to the delegation that more than 50 per cent of the Tamils lived outside the Northern Province. He also told them that the Lessons Learnt and Reconciliation Commission was appointed by President Mahinda Rajapaksa, and hence, Sri Lanka was serious about implementing the recommendations of the Commission. 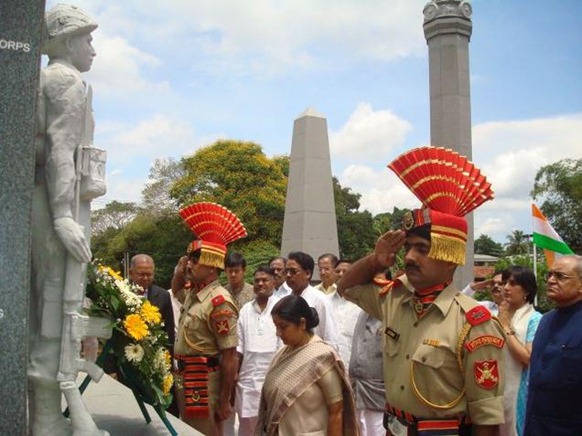 The Hindu Leader of the Opposition in Lok Sabha, Sushma Swaraj, pays tributes at the IPKF memorial in the outskirts of Colombo on Tuesday. Photo: R.K. Radhakrishnan Arrival Date: 17/04/2012

The Indian delegation, headed by Leader of the Opposition Sushma Swaraj, asked some very tough questions of both sides. “It is very clear that she [Sushma Swaraj] knows every aspect of the issue from the questions she posed,” said Suresh Premachandran, of the Tamil National Alliance. Congress MP Sudarsana Nachiappan, who has been in touch with the Tamil politicians here, and the government, and Communist Party of India (Marxist)’s T.K. Rangarajan, constantly explored the possibility of recommencing the talks between the TNA and the Sri Lankan government, in their meetings.

“We are for re-commencing the talks,” explained TNA leader R. Sampanthan, after a meeting with the delegation here. “The issue is that both sides should have faith in the talks. The government should come forward,” he said. In a presentation at Parliament, Mr. Sampanthan explained how the Sri Lankan government had broken promise after promise.

Insisting that a solution to the Tamil question will only be possible with foreign involvement, Mr. Sampanthan said over a year of talks had not yielded anything on the ground. Asked what he expected the delegation to do — especially since it was not a fact-finding mission or an empowered committee — the TNA leader said he expected the delegation to “present some kind of a report to the government, to their own parties,” and generally make India aware of the events in Sri Lanka since the conclusion of the war.

Mr. Premachandran said the TNA had also brought to the Indian MPs’ attention the fact that the high-security zones in the Northern Province still remain occupied by the Amy, that over 800 persons are in government custody without charges, and many thousands are missing.

The delegation also met representatives of the Tamil United Liberation Front (TULF) and Ceylon Workers Congress. The TULF handed over a memorandum which made it clear that a “meaningful devolution which can meet the aspirations of the Tamil people, based on the Indian model only can bring permanent peace and reconciliation among the various communities.”

Ms. Swaraj and the delegation visited the Indian Peace-Keeping Force memorial on the outskirts of Colombo and paid floral tributes. On Wednesday, their schedule takes them to Menik Farm — a safe haven for Sri Lankan Tamils — where the team will interact with Internally Displaced Persons still in the camp.