Sri Lanka’s Sinhala military occupying the famous archaeological site Maanthai in Mannaar, where the historically pivotal sacred Tamil-Saiva temple Thirukkeatheesvaram is located in the country of Eezham Tamils, has embarked upon building a Buddhist temple at a forcefully confiscated private land, just 200 metres away from the Saiva temple. Sometimes back, the New Delhi Establishment gave much publicity for the money it gave to preserve the Thirukkeatheesvaram sacred site. But the money is now used by genocidal Sri Lanka to build a Sinhala-Buddhist ‘pilgrim’ centre at the site in order to Sinhalicise the cultural landscape in the way Kathirkaamam was Sinhalicised and is now lost to the Eezham Tamils. The temple management that has now fallen into Colombo-centric hands is silent on the issue. 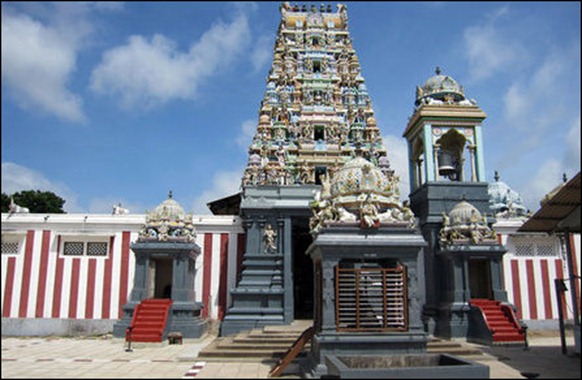 When the local people vacated Maanthai during war in the 1990s, the occupying Sinhala military confiscated a plot of land measuring 40 perches, belonging to Gnanapirakasam Mariyaseelan and was lying close to the Saiva temple to plant a Bo tree and to build a Buddhist shrine. The occupying soldiers were said to patronize the shrine. Later it was abandoned.

Recently, even the adjacent land of another 40 perches, belonging to Kanapathipillai Vijayakumar is forcefully confiscated by the occupying military to build a larger Buddhist temple in 80 perches of land.

A bronze statue of Buddha has already been placed at the site.

A group of Sinhala-Buddhist monks, who have come from the south, are engaged in the building activities with the full support of the Sinhala military stationed at the locality.

The whole area of nearly 3 km circumference is an extensive archaeological site, dating from prehistoric times to c. 16th century. The site has the remains of an ancient, walled city.

Six months back, Colombo’s Archaeology Department has declared the entire area as an archaeological site. But current building activities of Sinhala-Buddhists have started there with SL military support.

While the genocidal SL Government is silently carrying out its agenda, the Saiva temple management, now based in Colombo is either gagged from protesting or is compromising.

Initially a 250 million rupees grant was made available jointly by New Delhi and Colombo for ‘infrastructure’ development of the sacred place. This was used for building roads etc around the place, which is thoroughly militarised due to its strategic importance of controlling the entry into Thalai Mannaar Island and controlling the junction of two highways, A32 and A14.

The Sinhala-Buddhist ‘pilgrim’ centre, north of the Saiva temple was built on this money.

Later, New Delhi has now made another 300 million rupees grant.

The entire process is a continuity of the strategic partnership between New Delhi and Colombo commenced in coursing the war to the genocide of Eezham Tamils and nothing has changed.

Sections of media, intelligence-operated academics, business corporates and Stalinist political parties in India back the process by negating the right to protection and right to self-determination of the nation of Eezham Tamils.

The emerging esoteric state in New Delhi, shaped by the Congress regime in the style of KGB-operated former USSR, tries to hoodwink political opinion in Tamil Nadu and tries to lure Eezham Tamils that the saviours are nowhere but in India. But, so far New Delhi has not proved even an iota of its ability to stop the structural genocide. On the contrary, it gives all diplomatic, logistical and material support to the process. 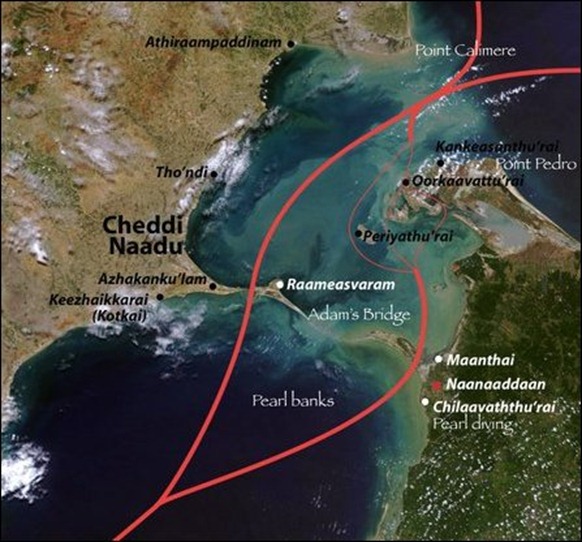 Trans-oceanic trade routes of the past. [Satellite photo by NASA, Visible Earth, Legend by TamilNet]

Thirukkeatheesvaram, facing the Palk Bay, is one of the two Tamil-Saiva temples in the island that was consecrated by the Theavaaram canon of the 7th century AD Tamil devotional movement. The other temple is at Thirukoa’namalai (Trincomalee) on the eastern coast, facing the Indian Ocean.

The ancient city Maanthai or Maa-thoaddam, meaning the ‘great harbour’ where Thirukkeatheesvaram is located, was a meeting ground of the maritime routes of the East and West that were passing through the Gulf of Mannaar and Palk Bay in the ancient and medieval times from the Roman world to the Chinese Far East.

The harbour was located at the passage between the Gulf of Mannaar and the Palk Bay. The ancient commercial importance of the harbour was pearls and chunks the waters were producing.

Diving for pearls and chunks was entirely an activity of Tamil coastal communities on either side of the waters, from very early times to recent colonial times.

The Sinhalese were never engaged in pearl and conch fishing.

Even the sections of the communities that are found today as Sinhala-speaking in the South were Sinhalicised only in very recent times.

Maanthai, the trading activities of which reached its peak during the medieval Chola-Arab-Chinese trade, declined afterwards.

Maanthai and Mannaar were parts of the Tamil-Saivaite, Kingdom of Jaffna, when the Portuguese captured it.

The Portuguese destroyed two Saiva temples, Thirukkeatheesvaram and Tho’ndesvaram located at the place. They also built a church there, which was later abandoned.

Due to silting the harbour became not usable in Portuguese and Dutch times and activities shifted to Mannaar Island.

Later, with the advent of steam vessels, the entire sea route in the shallow waters became unusable. 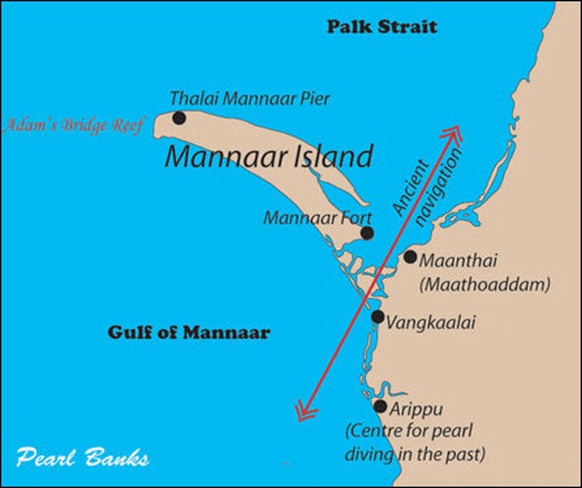 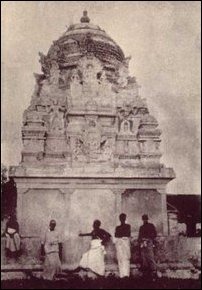 Abandoned and forested, and with a small Tamil Catholic population from the descendants of the pearl-conch divers in the neighbourhood, the Maanthai archaeological site was ‘Crown Land’ coming under the Government Agent of Jaffna, during early British times.

Arumuga Navalar, the champion of Tamil-Saiva revival of Eezham Tamils, wanted to rebuild the Saiva temple Thirukkeatheesvaram of Theavaaram fame, and in 1872 he made appeals to the British government to give land at the site.

Even though having great respect for Navalar, the Government Agent of Jaffna at that time, Sir William Twynham, was a bit angry with Navalar, because the latter was also engaged in leading public protests against the colonial administration’s failure in providing relief to epidemic-famine victims of 1877. 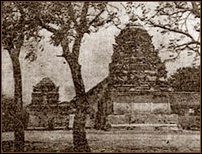 The result was that Navalar was not getting the land until his death in 1879. When he died, Twynham, who showed his respect by announcing holiday to the Kachcheri to attend to the funeral, later gave the land to a follower of Navalar, Pasupathi Cheddiyaar who re-built the temple. Pasupathi Cheddiyaar was also one of the founders of Jaffna Hindu College.

The temple became a centre of inspiration in the Tamil-Saiva revival of Eezham Tamils. Many of the elites of the nation were involved in doing charity to the place. A bigger temple in stone was built in the early 1970s.

With the shift of a section of the Tamil elite to Colombo, the Temple management also became dominated by Colombo Tamils of Jaffna origin.

Sir Kandiah Vaidyanathan who was close to the Sinhala ruling families of Colombo and a Colombo-based lawyer, Mr. Namasivayam who recently passed away at the age of 100, were long contributing to the management and in protecting the temple from all kinds of threats that were coming from time to time.

At present, Mr and Mrs Kailasapillai, based in Colombo, play major roles in the temple management.

Colombo-based Tamil organisations, either due to fear or due to compulsions for collaborative politics, are ‘flexible’ in compromising the interests of Eezham Tamils, complain grassroot civil society activists.

A similar tendency is seen in sections of the diaspora too that have interests in the Colombo-centric system.

For instance, the owner of the 40 perches of land, recently confiscated by the genocidal military for the construction of the Buddhist temple close to the Thirukkeatheesvaram temple is living in the diaspora. He is reportedly hesitant to make international level protests, due to his fear that his visits to Colombo would be affected.

The West that tries to prod Eezham Tamils to engage in ‘collaborative’ development has never done anything for the protection of the diaspora from this kind of intimidation the genocidal state has become an adept of. Nor they concede, even in the recently enacted US-resolution at Geneva, that their model of implementing anything within a united or unitary Sri Lanka is not workable. 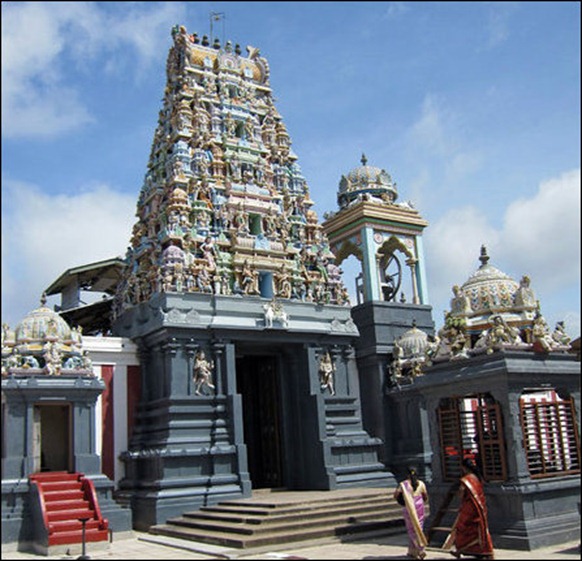 Archaeological excavations were carried out at the temple surroundings at Maanthai since 1950s.

In the first series of excavations conducted by Shanmuganathan in the 1950s the structure of an old Saiva temple and a Sivalingam were unearthed close to the present temple. Another special feature was a megalithic burial of extended inhumation excavated by him.

In the 1960s and 70s, Colombo department’s Raja de Silva conducted some excavations which brought out a lot of material, but the reports were not published.

Between 1980 and 1984, Chicago Oriental Institute’s Prof John Carswell, in collaboration with the SL Archaeology Department conducted three seasons of excavations. The Ford Foundation provided the fund for the extensive excavation in 1984.

The excavation revealed the massiveness of East – West trade carried out through the port as well as the site’s prehistoric origins going back to microlithic times.

The excavation that involved the participation of British, American and Indian excavators along with local ones, and the participation of Sinhala and Tamil university students, ended abruptly with that season, when the SL military stationed at Tha’l’laadi camp burning the Mannaar city and killing local people at Maanthai towards the end of the excavation in 1984, marked the beginning of war in that part of the island.

The SL government always had the habit of taking away excavated material of Maanthai to Anuradhapura in the Sinhala south.

The heritage of the Tamil land thus transported to the south is beyond reach to Tamils, and often material of any identity-significance used to go ‘missing’.

Prof John Carswell could not able to compile the report of the excavations for 27 years since their abrupt end.

It is now said that a monograph, jointly edited by Prof Carswell and Dr. Siran Deraniyagala is ready for release shortly.

Last month, sending a short review and wishing well to Dr. Thiagaraja’s publication released in London, the British-born Prof Carswell now in his 80s, said Maanthai “was never the prerogative of any ethnic or religious group.”

“It was a city built on a collaboration of commercial and political interests, coming from east and west, north and south,” Carswell said, adding that ancient cities like Maanthai were “windows on a large, complex, and above all ‘dynamic’ system.”

Carswell’s universal approach to an archaeological site of ancient entrepot heritage may be right, and may be in synchronisation to the ‘globalisation’ of contemporary affairs based on current collaboration of commercial and political interests.

But to what extent the approach brings in justice to the heritage and identity of the people, whose pearl and conch were the footing to the “window”, and who now face structural genocide and annihilation of their nation, is the question. 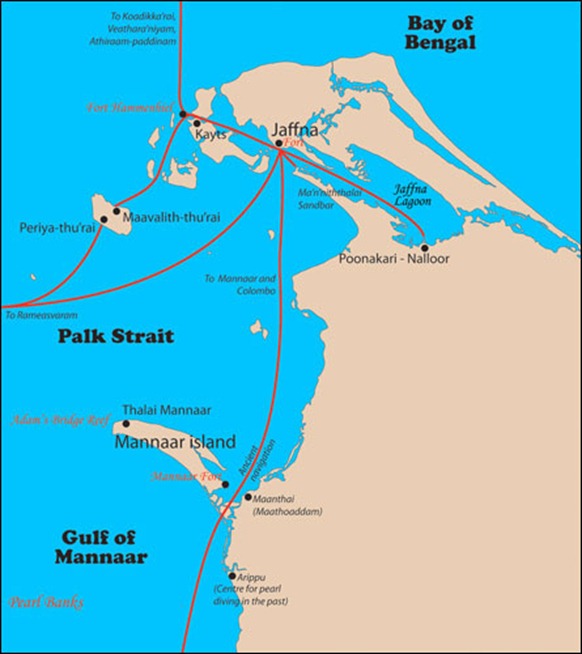 Already the genocidal state has converted the northwest tip of the Jaffna Peninsula, Thiruvadinilai, located at the closest distance to the Tamil Nadu coast as a Sinhala-Buddhist sacred place, saying that it was the landing place of Buddhism to the island.

While the early Buddhist chronicles like Dipavamsa and Mahavamsa themselves give a Tamil name for the landing place, and while the later Buddhist pilgrim literatures like Nampota used call the entire region as Demala Ratta (the country of Tamils), the present Sinhala-Buddhist state has militarily confiscated the traditional villages and lands of Tamils there.

Local Tamils are not even allowed to enter the area while Sinhala-Buddhist ‘pilgrims’ from the south throng to the place.

A Sinhala military cantonment is also now being built there. 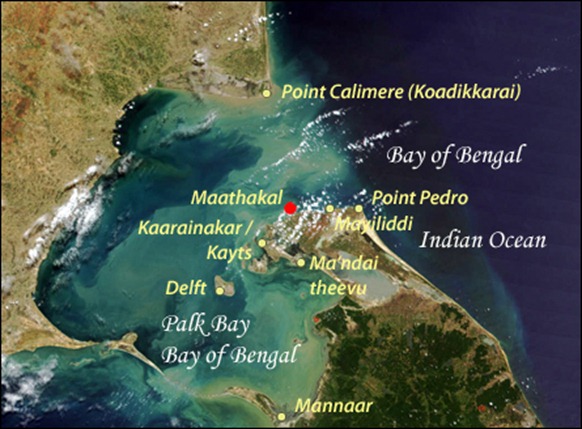