Grassroot representatives from Vadamaraadchi East of Jaffna district on Sunday urged civil and political activists in Jaffna to help them legally confront the indiscriminate sand mining that continues unabated, exceeding any meaningful limit of scooping. The village of Ampan is being submerged in water. The organisations, who met civil and political representatives on Sunday expressed fear that a future Tsunami could cause the land link between Vadamaraadchi North and Vadaramaraadchi East to break rendering Vadaramaraadchi North into an island. The sand scooping, which has become a multi-million business for EPDP operated organizations like Maheswari Foundation, has already claimed the life of an environmentalist who was instrumental in organizing protests against the destruction. 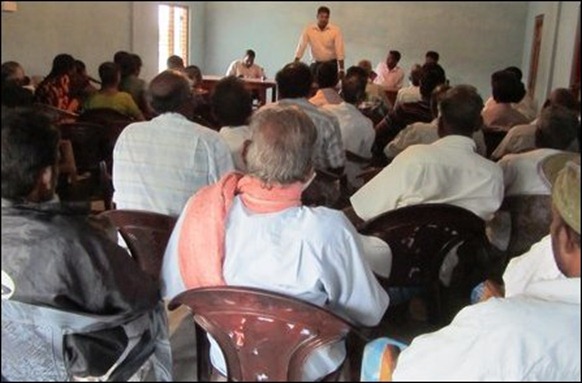 The seawater that has entered the village has reached to a level that the people in the area have started fishing there, the representatives of grassroots organisations said at the meeting held at Adampan on Sunday with civil society members, political activists and journalists.

Political influences were blocking the villagers of Adampan from initiating a broader campaign, the representatives told civil society members and sought legal assistance to confront the sand scooping.

Outfits such as Maheswary Foundation carry out the sand scooping with the collusion of the occupying SL military and the EPDP paramilitary.

An environmental activist, Ketheeswaran Thevarajah, who voiced against such sand scooping in a nearby village, Kudaththanai, was slain by the paramilitary on the New Year Eve in 2011. Ketheeswaran had campaigned against the sand scooping through social media, exposing the situation with photos that illustrated sea water coming inside in areas scooped of its sand dunes at Kudaththanai.

Three weeks later, 36-year-old Rasarathninam Sathees, Maruthangkea’ni area organiser of EPDP, who has been critical of EPDP leadership on its Maheswary Foundation business of excavating sand from Vadamaraadchi East, was found slain.

The business of sand excavation is said to be bringing in multi-million rupees into the pockets of the SL paramilitary and military officials.

While their villages were getting exploited, there was no ‘development’ reaching the villages in terms of roads or any other infrastructure, Adampan villagers complained adding that there was no meaningful effort by the civil authorities in building protective bunds that could hinder seawater from entering their village.