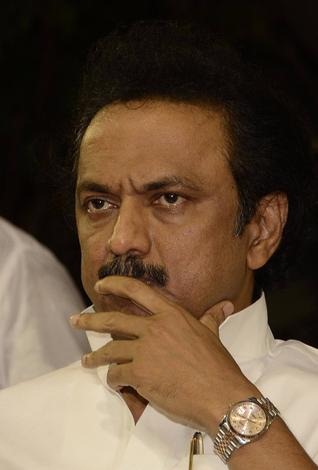 An election to the Tamil Nadu assembly before the end of the current term is likely,said the DMK Treasurer, M.K.Stalin here on Thursday.

Speaking to press persons,Mr.Stalin who is on a four day visit to the hill station observed that the direction in which the Jayalalithaa government is now heading indicates that it will not last the full term. The people will start revolting. “It could come after a couple of years, a year or much sooner than that” he said and alleged that corruption was rampant. “Even in the local bodies nothing works without parting with a commission of 15 or 20 percent.”

Lamenting that opposition parties are unable to have their say in the Assembly in any form, he contended that his family including his father were being unnecessarily targeted. “There is neither law nor order in the state”, he opined. Hence the party had decided to take up its plight with the people.

To a query, he claimed that the reported power struggle within the DMK was a creation of the media and regretted that media houses were toeing the line of the ruling party.

When asked whether the DMK was open to allying with parties which had come out of the AIADMK alliance, he said that only the leader of the party can take a decision on that.

Stating that his party will contest the Pudukottai by-election,he said that such elections are not being conducted in a free and fair manner. Since a blind eye is turned by the election authorities to the activities of the ruling party, it gets an undue advantage.

The DMK is for the formation of the separate Eelam in Sri Lanka, he averred and pointed out that party leader M.Karunanidhi has announced that the Tamil Eelam Supporters Organisation (TESO) would be revived. He expressed the confidence that the demand will get global support.

Earlier speaking at receptions accorded to him at Coonoor and here, Mr. Stalin said that the people are dejected that the expectations with which they had voted for the AIADMK had been shattered. A sense of having been let down is all pervasive.

The schemes being implemented by the AIADMK government are not new. They are only different versions of the schemes evolved by the DMK government. A full stop should be put to the misrule of Ms.Jayalalithaa. In or out of power, the DMK will always be pro-people.