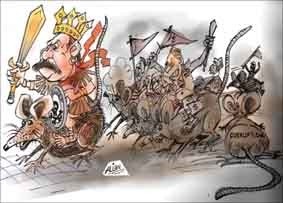 The Roman emperors walked a tightrope, pretending to be merely first among peers when dealing with the aristocracy, commander-in-chief when dealing with the army, and godlike when dealing with parts of the empire that expected their rulers to be numinous. They substituted a god-when- I’m-dead strategy for the old god –for-a-day compromise: emperors were merely outstanding men until they died, the theory held, whereupon they were clutched to the bosoms of divinities. Some, like the emperor Vespasian, found it ridiculous; as he collapsed, dying, he joked with his courtiers, “I think I am becoming a god”- Ian Morris (Why the West Rules…)

Our South Asian culture is very much numinous, child to parent, wife to husband, student to teacher, employee to employer, patient to doctor, populace to political leader, the recipient of patronage/protection very much the humble supplicant. The expectation is that the patronage/care giver is much more than that basic role, nearly wrapped in divine garbs, deserving of abject worship. No matter that in almost every situation the myth is explored before our own eyes, the demi- gods shown to be of clay feet, the expectation lives on. The husband cheats, the teacher proved to be half-baked, employer curmudgeon and mean, the doctor bungles, political leader robs all, but they go on, numinous as ever.

For such a culture the inappropriateness of a Presidential system, if a larger sense of democracy as well as the personal dignity of its citizens is taken as desirable goals, is apparent. The argument that the concentration of power in the hands of the President would lend itself to a rapid economic growth has proved itself spurious. Under the Presidential system in some years we saw a negative growth in the economy. Even in the years we saw a growth, what role the office of the President played in that growth cannot be identified with any certainty. Many of the institutions directly under the President are making huge losses and are often a drag on the entire country. Perhaps it could be argued conversely that if freed of the heavyweight of Presidential interference our economy could have done better.

But on the other hand, for a general public seeking comfort in the image of leaders   who are omnipotent and omniscient, could a reality of normal men, gaining leadership on merit and very much open to challenge suffice?  This worshipful cult operates in the UNP the main opposition party as well, where going by its recent evolution there cannot be any sense of justice or fair play. The same overarching   conflict between deeply ingrained cultural reflexes and the pretences of modernity, the latter which is obviously only skin deep, is dragging it down. This holds true in many voluntary organizations. In most organizations in this country the boss rules to an absurd extent.

One of the lesser known institutions   of our Presidential system is the President’s Fund, constituted with public funds but used as a slush fund for undefined expenditure solely at the discretion of the President. In the democratic world today where accountability in public office is a fundamental facet of governance such discretionary funds are rare to find. The general rule is that public funds have to be accounted for and has to be transparent in all aspects. As far as we are aware the President of this country is a human being and is also a politician. He is not a god. He cannot have powers and discretions that are totally unaccountable.

According to recent newspaper reports the latest beneficiary of the Presidents fund is Jayalatha Jayewardene   an opposition member of parliament. The honourable member had apparently taken ill suddenly while in London. Although only a few months ago he was   lambasted by the government ranks for activity, which it was suggested amounts to anti-national, apparently in the true spirit of the parliamentary democracy, people’s funds were made available to the people’s representative in his hour of need. It is also being whispered that public funds have been made available to several well heeled persons who were in need of expensive medical attention in recent times. Apparently among these are well known professionals whose daily income was in the region of millions. Some of them are friends of the powers that be while others are political fellow travelers, in other words part-time politicians.

We do not want to be unduly tendentious on the use of a discretion to assist a sick man. But one cannot deny that there are millions of people in this country for whom caring for a sick relative has become too heavy a financial burden to carry. If you care to chat to any of the thousands who wait patiently in front of our hospitals for the visiting hour to see a suffering patient, the sad reality of our health care will be apparent. In simple words most of them have no money to look after the sick person. In such a situation to use public money in a very selective way surely amounts to an act of favouritism with other people’s money. When we consider that snout in the trough politics is the norm here and cross-overs and payouts quite acceptable, to make available huge amounts of public funds to a politician, however elevated, surely leaves a bad-taste. The only way such discretion can be condoned is by believing that those elected to office somehow acquire a divine status. In such a culture we can accept that anyone elected to the office of the President for instance, “becomes a god” like Emperor Vespian said. But then it was only a joke.