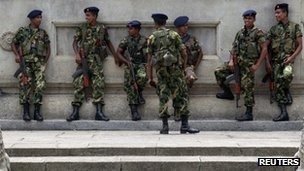 A key Tamil opposition politician in Sri Lanka says he fears for the safety of dozens of people arrested in a fresh round-up of Tamil Tiger suspects.

The government has acknowledged holding them and says most will be put through a process it calls "rehabilitation".

It says the families have been informed, but this is disputed by the biggest Tamil party in Sri Lanka.

After at first denying reports that it had detained a new batch of people it suspects of past links to the Tamil Tigers, the Sri Lankan government now acknowledges it is holding them.

Thirty-eight people, out of 150 initially questioned, are under arrest after being detained in the Trincomalee area of north-east Sri Lanka, police said.

Police spokesman Ajith Rohana told the BBC that the 38 had past links to the rebels and that their families had been informed.

The leader of the Tamil National Alliance (TNA), R Sampanthan, says relatives of the detainees have no idea where their husbands or sons are.

He told the BBC’s Charles Haviland in Colombo: "I hope they are safe. I hope they’re alive. But that is a matter which is in doubt, because the whereabouts of these persons are not known."

He added: "There is no reason whatever for the persons who have taken them into custody to be so secretive about where they are being held."

He insists the detainees are being held illegally and on an arbitrary basis. The government says all have been brought before magistrates.

The police spokesman said they were taken in under the Prevention of Terrorism Act on an order signed by President Mahinda Rajapaksa in his capacity as defence minister.

The spokesman said most of the detainees will be put through a year-long process known as rehabilitation, although those accused of serious offences would be tried.