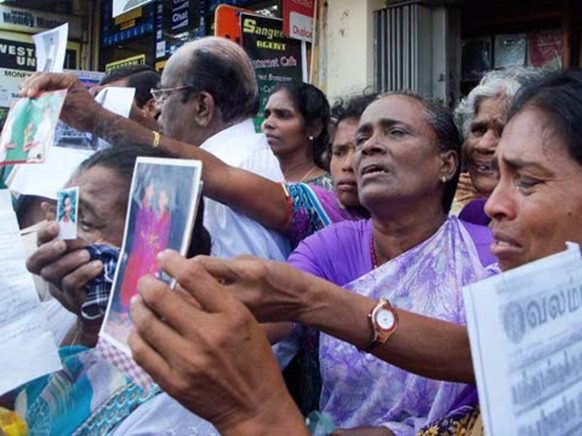 “Disappearance is far worse than death, because when a person dies, when I know that, so and so is dead, the story ends and somehow or other we close the chapter. But when a person has disappeared, it is an eternal suffering.”

In the controversial Commission of Inquiry on Lessons Learnt and Reconciliation, 53 LTTE cadres who surrendered during the final days of the war in May 2009 are alleged to have been disappeared and are reported to be under the category of ‘missing’. What happened to these 53 people? Their relatives and close kith and kin say that they were last seen and heard surrendering to the Sri Lankan Army.

In the LLRC report, many family members of former LTTE cadres have complained that their husbands, wives, sisters, brothers, sons and daughters have disappeared after they surrendered to the Sri Lankan security forces. These family members still await the return of their loved ones, not knowing whether they would ever return. Below is a quotation from the LLRC report where a wife complained to the commission about the disappearance of her husband and presented the tragic story, which she is forced to deal with everyday.

“The wife of another former LTTE cadre appearing before the commission at the District Secretariat in Madu stated that on 16th May 2009 she and her three children had come to Mullaittivu from Mullaivaikkal. Her husband had not accompanied them but had joined them on 17th May 2009. On 18th May 2009, in the morning, he had surrendered to the Army at Mullattivu together with some important LTTE cadres (Elamparthy, Kumaran, Ruben, Babu and Velavan). They had surrendered accompanied by Farther Francis Joseph and had been taken away in a bus. She stated that she had not heard from him since then. The Commission made inquiries regarding Farther Francis Joseph from Farther Muralitharan the Parish Priest and Assistant Administrator of Madhu Church, and he stated that Farther Francis Joseph had been a political teacher of the LTTE and people had told him that Father Francis Joseph had been in the conflict area until the end with the LTTE and was supposed to have surrendered and since then his whereabouts were unknown.”

(Page: 111 of the LLRC in the Representations to the commission regarding alleged disappearances after surrender/arrest)

There are 18 such complaints lodged with the LLRC with regard to the 53 disappeared LTTE cadres, who surrendered. Their whereabouts are unknown to this day. Whether they are alive or dead is unknown and presents an extremely tragic and problematic context for their families, who still hope and wait for their return. During a visit this writer paid to Jaffna last January, she was confronted by dramatist in Jaffna who narrated the sad story of many wives whose husbands have disappeared due to the war. The Jaffna dramatist whose name is Dev Annand had done research on the subject and had woven a drama based on real incidents. His words are still alive in my memory.

“In the Tamil culture the wife has to wear red kunkuman (a pottuwa) on her forehead if she is married as a custom. But if the husband is dead, they cannot wear this as a ritual. So in the case of ‘missing’ husbands, women do not know whether to wear the kunkuma or not, and they are eternally getting criticized by the elders of their community for this: because those who believe that their husbands are dead, are telling them not to wear it, while the wife’s heart that still waits for the return of her husband wears the kunkuman as hope.”

When this writer contacted the Military Spokesperson, Brigadier Ruwan Wanigasuriya, and questioned him regarding these 53 LTTE cadres who have disappeared and inquired about what actually happened to them, Wanigasuriya stated that the army has appointed a commission called the Court of Inquiry headed by a Major General and also compromises of senior officers of the army to look into the findings of the LLRC report that are directly related to the army.

“This Court of Inquiry will look into all the findings concerning the military that are in the LLRC report, and under that they will look into this issue as well and investigate into this matter. However we have records of 27 LTTE cadres who deserted while they were hospitalized for various illnesses; and 13 other LTTE cadres who suffered natural deaths. The total of 11,995 people came to be rehabilitated in May 2009. This includes LTTE carders who surrendered during war and LTTE cadres who surrendered while they were in the Internally Displaced Persons (IDP) camps. From this number, 10,874 LTTE cadres have been rehabilitated and reintegrated to the society. From this lot, 655 cadres are with us at the rehabilitation centres now, and 187 are in custody at the Law Enforcement Authority for investigations due to the fact that there are evidence against them”, Wanigasuriya averred.

However, when pressed to answer about the 53 LTTE cadres that have disappeared, Wanigasuriya said that they could either belong to the 27 deserters or to the 13 LTTE cadres who suffered natural deaths and further added that the Sri Lankan army has given away all the LTTE cadres who were caught and surrendered in May 2009 (except for the 655 who are still at the rehabilitation centres) to the Prisons Department and the Sri Lankan Police Department.

During further investigations, this writer contacted the Prisons Department, Prisons Commissioner, A. Hapuarchi, who revealed that there are 500-600 LTTE cadres in the prisons of Jaffna, Vavuniya, Anuradapura, Magazine, Colombo, Bogambara, Batticaloa, Trincomalee, Negambo arrested under remand warrants. However, when this writer contacted the Police Spokesman Ajith Rohana regarding this matter he refused to comment saying that it is up to the Ministry of Defence.

Nevertheless, though the authorities keep passing the buck to each other (amidst themselves), the Tamil National Alliance (TNA) spokesman and Jaffna District parliamentarian, Suresh Premachandran, stated that the Sri Lankan army was not only culpable for these 53 lives, but also for the hundreds of other who have disappeared without a trace in this country.

“The army is answerable for this. And it is not just 53, about 200 LTTE cadres surrendered to the army with Father Francis Joseph on that instance. And since then, up to today, no one knows anything about the whereabouts of those surrenders’.  No one knows what happened to them and whether they are alive or dead still remains a question mark. The families of these people have not heard from them since. So the families have lost all communications with these surrendered LTTE cadres”, Premachandran added.

Speaking further Premachandran also revealed that in Menik Farm (after 2009) the army had taken away hundreds of boys and girls; and since then the relatives of these youths have not heard anything about their whereabouts. “They have gone missing. One of our TNA members has a list of more than 500 missing personalities who have disappeared from the Menik Farm”, Premachandran stated.

The LLRC report earned different kinds of reactions from the public. Ironically, even the people who were in disfavour of this report at first (and criticized the LLRC while declaring that it is partial) are now urging the government to implement the report as the government has accepted it. One such political activist is Dr. Vikramabahu Karunaratne. When questioned about the 53 individuals who are noted in the LLRC as ‘missing’ while they were in the custody and protection of the army, Karunaratne stated, “This has to be investigated and reported and action should be taken about this by the government.  We heard of many similar situations where LTTE political prisoners have disappeared after they were taken into custody. The government is saying that they are rehabilitating, but they never tell us about where these rehabilitation centres are situated, or how many LTTE cadres are within their custody. And when the TNA MPs tried to visit these rehabilitation camps, the government denied access and did not allow them to visit the rehabilitation camps”.

“We have received many reports from ex-LTTE cadres declaring that many carders disappeared during the process of rehabilitation and did not come out with them (once they were released)”, Karunaratne stated.

How does civil society respond to the disappearance of these 53 LTTE cadres? This writer spoke to a human rights activist who was closely monitoring violations of human rights in Sri Lanka during the time of the war. The activist spoke to this writer under terms of anonymity, and when questioned about these disappeared LTTE cadres and asked about what could have exactly happened to them, the activist revealed that they could either be killed, held in detention centres, or used as informants.

“Whether they are killed, held in detention centres or used as informants: either way it is illegal and wrong. Their family members should be allowed to see them. If they have done something wrong, then they should be legally charged,” he said.

Speaking further about the disappearance of the 53 individuals, this human rights activist stated, “Thousands of people have seen these people surrendering to the army with Father Francis Joseph. And therefore the army cannot deny it. Sri Lanka Human Rights Commission should question the Brigade Commander in Wattvakal in Mullaitivu as it is during his presence that most of these disappearances took place, and the documents about these arrests and surrenders that are with the military should be taken into careful consideration by the Human Rights Commission. According to the 3596 who have complained, 1018 people have surrendered and disappeared. This shows that the government is not willing to peruse the matter. How can there be any reconciliation without getting to know what has actually happened to these people? There is no point in building roads and monuments without actually finding out what happened to these thousands of people who have disappeared”.

It is not clear how many LTTE cadres who surrendered have disappeared today. The LLRC report says that it is only 53, but in reality whether it is more or less than this figure, the fact remains that many people disappeared during the time of the war. And they still keep disappearing. And every time someone disappears, somewhere, in some corner of this country, someone cries and waits for the return of that person who forgot to bid goodbye.