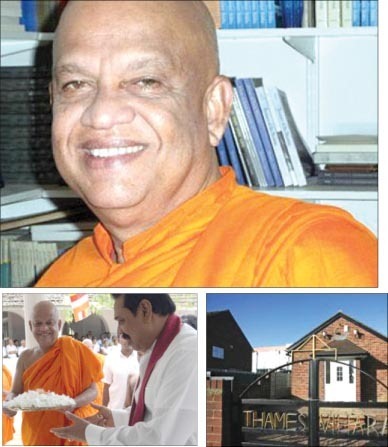 He was “Venerable” Chief Sanghanayaka Thera of Great Britain and chief incumbent of the Thames Buddhist Vihara and also Parivenadhipathi of the Vidyaravinda Pirivena, Pahalagama, Gampaha and Chief Lekakhadhikari of the Sri Kalyani Samagi Dharma Maha Sangha Sabha. From the 1st of May he is just a Somaratna.

It is worth to look at what has happened to him. Here is a brief account of the story. In May 2010, Child Abuse Investigation Command officers in the United Kingdom began an investigation into allegations of sexual assault and rape against the chief incumbent of Thames Buddhist Vihara Ven. Pahalegama Somaratana.

On Tuesday, September 14, 2010 a (then) 64-year-old monk was arrested on suspicion of an indecent assault and rape. The monk had tried to sell the temple and escape the country, but some of the management board members of the temple had opposed the move. The monk still tried to escape. But he was questioned at Heathrow police station and later bailed pending further enquiries.

Pahalagama Somaratana Thero, had been charged with another eight counts of sexual abuse on Friday, November 11, the London Metropolitan police said.

According to the Metropolitan police, these eight indecent assaults on a female under 14 years of age took place between January 1, 1985 and December 31, 1986 at an address in Croydon. The 65-year-old Pahalagama Somaratana Thero appeared on bail at Feltham Magistrate Court on Friday, December 2  and was bailed to appear at Isleworth Crown Court on December 20, 2011. The monk denied all charges against him. The first victim spoke of ten instances of abuse in the spring of 1978, including rape and five instances of sexual assault with which Somaratana has been charged. When asked why she had not come forward sooner, the witness said Somaratana had threatened that her “parents would be angry and that her father would die”. Prosecutor Richard Merz told the Court the girl had been enticed into the monk’s room with fruit, Polos and told to sit on his lap. Later Somaratana is said to have cornered her in the temple shrine and raped her.

The second alleged victim, said to have been sexually abused in the mid-1980s, described to the Court that she remembered “being alone” in Somaratana’s room on the pretence of discussing upcoming temple services. When questioned why she had only come forward about 25 years after the alleged assaults, she told the Court: “At the time as a child, I thought that it was all an accident. Looking back on it now as an adult, I know that this was definitely not the case”. The Court was told that she went to the police after details of the alleged abuse were revealed during a hypnotherapy session three years ago.

Giving evidence monk Somaratana said that he did not remember the first victim during the time of the alleged rape and sexual abuse. He further claimed that as a monk he does not “touch people, especially women as it is wrong and considered a sin”.

When asked by his own lawyer whether he attempted to rape the first victim or touch her in an inappropriate way during the said time, the Buddhist monk’s response was: “not at all… no”. The prosecution brought attention to the statement that the chief monk had made in his first police interview, after he was arrested in September 2011 at Heathrow Airport. He had suggested to the police that the first victim might have got him mixed up with someone else and also that she may have said it was him due to the victim’s family having issues at that time with the monk.

The prosecution team stressed that this simply could not have been the case. With regard to the victim getting Pahalagama Somaratana mixed up with someone else, the chief monk himself confirmed that “priests in their robes were distinctive” and could be told apart. Further, the issues that he said he had with the victim’s family which would have encouraged the victim to accuse him of rape and sexual abuse, was confirmed by both the chief monk and the prosecution team as only having occurred very recently in 2010. The victim had made the complaint about Ven. Somaratana to her sister much earlier, between 1991 and 1992.

The victims were very brave ladies. But the mainstream media in Sri Lanka would not help get their story out to the world. The mainstream media have been censored from covering this case of child sex abuse. It was only The Sunday Leader and a few websites and BBC Sandeshaya that covered the story.  This is clearly a public interest issue. Firstly, this story is about the welfare of children; child abuse victims are usually not willing to come forward, but they did. Secondly, this case is based on historical allegations. It is worthwhile for the public to know how Courts deal with historical allegations. Thirdly, Somaratana was a religious leader, who breached the trust of his followers. Finally, this same monk Somaratana is running orphanages in Sri Lanka. Why did the Sri Lankan mainstream media not cover this story? Why did they censor this story? Was it because of media suppression or are they under pressure from Sinhala-Buddhist fundamentalists? Editors of Sri Lankan mainstream media should answer these questions.

According to “THE GAZETTE OF THE DEMOCRATIC SOCIALIST REPUBLIC OF SRI LANKA -Part II of May 7, 2010, the Pahalagama Sri Somarathana Nayaka Thero Foundation”, a private Bill presented in Parliament by Hon. Vijitha Herath, MP for the Gampaha District, Somaratana can establish and maintain institutions for educational and social service activities such as childrens’ homes, elders’ homes, hostels and other social service institutions. Now Somaratana runs the Pahalagama Orphanage in Gampaha.  Talking this writer the head of the Colombo based “Justice for Victims”, Visakha Tillekeratne said, “They would like to unequivocally request the Government of Sri Lanka’s institutions for child protection which are the Ministry for Child Development and Women’s Affairs, the National Child Protection Authority and Department of Probation to look into the orphanage run by Ven. Pahalagama Somaratana. A monk convicted of sexual violence cannot be responsible or trusted with tender young lives. This orphanage ideally should be brought under state control or be handed over to a respected and credible organization to run. In the alternative, it can be closed up and the children transferred to other orphanages. The state cannot abdicate its responsibility by the children of this country.”

“Children living in orphanages or homes are more prone to child abuse because of several reasons,” a former Chairman of the National Child Protection Authority Prof. Harendra de Silva said. “They are powerless and have no parents or relations: to whom can they complain? Only to the authorities in the home who are likely to be the perpetrators or linked to the abusers through monetary or power gain. Some are dependent on the persons for employment and are likely to be silent – ‘passive perpetrators’”, he added.

The power wielders in the orphanage are often abusive.  Both physical and emotional abuse is thrown at the children and they would be terrified of such a person. There is often blackmail through denial of food and throwing them into dungeons where they would perish, etc. (In an index case in the Katharagama area, the head clergy threatened to kill four sisters and imprisoned them by putting them in a dungeon in the room that was covered with metal sheets!) He abused them all. In the same case he used to phone a magistrate, the OIC and officials in the presidential secretariat in front of the girls and tell them how powerful he is! He also asked the girls to count 15,000 /= from the donations telling them the OIC is coming to collect it.  They have access to the children without scrutiny by others. Some of the persons getting employed in homes are people who are pedophiles and the same would apply to games masters, Scout masters and Hostel wardens and masters. However it must be stressed that only some may be attracted to these positions and not all. Ideally these persons should be screened before employment by psychologists and periodically reviewed. The children also have to be assessed with special emphasis on abusive episodes from peers and teachers.

So, the Sri Lankan government must investigate this pedophile monk’s orphanages and the Editor’s Guild of Sri Lanka should clarify why they did not cover this story.