The economic consequences of the decisions made by the Mahinda regime, to satisfy the international money lenders, are becoming intolerable. Apart from those who contribute to the Sinhala Buddhist ideology of the regime and those who are profiting by the regime’s excesses, the rest fight on a daily basis without much coordination, to cope with the rising cost of living. It is usual to see people buying one egg, half a loaf of bread, and 100gms of sugar; more seriously, even cutting down on essential medication because that too has become a luxury. What Bandula suggested was forced austerity. Actually today, in general, a family is forced to survive on Rs 7,500.00 per month or less, so that children could go to school. Though I did not mobilize, there were enough people who would have marched upto the Ministry of Education and physically hurled him out on to the street. That was the level of anger.

Perhaps, all of this would have been somewhat tolerable, at least to the middle classes, if not for the Sinhala Buddhist chauvinist bigotry shown by the government. What this regime has excelled in is, twisting the truth to suite their ideology.   Hard evidence is neglected and lies are said to suit the agenda of the regime. This regime wants us to believe that their patriotic actions have antagonized the global powers and that there is an international conspiracy to destroy this patriotic people’s government! Thus, the political activists and journalists who were abducted in the past were really paid traitors and those abductions were ploys engineered by foreign agents. The prices are rising in order to keep up with the greater demands due to rising incomes of people! The finance ministry cites the number of luxurious vehicles on the roads of Colombo as evidence for how well the economy is doing. Apparently only revolutionary Marxists and Tamil terrorists are dissatisfied with the policies of the government! 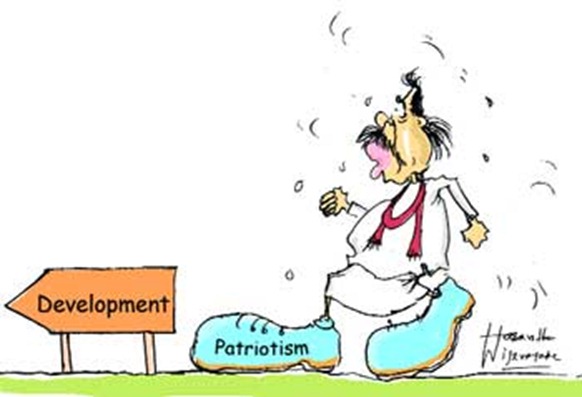 The government believes that their patriotic campaign based on the Sinhala Buddhist ideology, is still strong enough to suppress any dissent. A newspaper recently reported that Minister SB Dissanayake has proclaimed that university students should now apply for loans to fund their higher education as we are a middle income country. Without any cabinet decision he has announced the scrapping of free education. Can a Minister announce such a change through a statement to the media? This kind of comments made by the Higher Education Minister has become a serious problem. It may be funny to some people, but it is too dangerous to disregard such, as wild thinking.

What is disturbing is that while the general public appears to be increasingly disgruntled with the performance of the Mahinda regime, people appear to not see that this is a problem of the regime. This decadence is the nature of this regime and the finger should be directed at the elites of the regime:  the Rajapaksa family. Their politics is a combination of populism based on Sinhala Buddhist chauvinism, practiced with the threat of state terror if anyone steps out of line. Supporters will be looked after as long as they do not challenge the overlord. Development according to the Mahinda regime is all about doing things good or bad. It is not about actual improvement in people’s lives. No; that is not necessary. Instead, development is about commissions and then providing vulgar entertainment and chauvinist campaigns for the masses so that they can be distracted from the fact that their own lives are steadily deteriorating. So, projects are opened with cart races and marathons. Crowds of people are encouraged to ‘view’ these ‘miracles’ at state expense. Indicators of development are the number of limousines on the road, number of people taking the Southern Highway to have lunch in Galle; number of luxury hotels that come up around the country. All this is backed up by fake statistics that claim unemployment is down, poverty rates have declined miraculously, and economic growth is unprecedented. We are told that the IMF is ever ready to step in with another loan. Definitely it will declare that the economic fundamentals are strong!

Dambulla and the fall out

However, what happened in Dambulla and its fallout is yet another reflection of the growing chaos unleashed by the chauvinist regime. Having unleashed, fuelled, nurtured and protected Sinhala Buddhist chauvinist forces to the maximum, this regime has no other way to handle the growing resentment except by using such barbaric pogroms. It will mobilize its most ardent and passionate supporters. The regime’s Sinhala Buddhist chauvinism is the main factor that is providing it with some militant mass support at the moment. Any indication that it is not willing to stand by its racist credentials will complete the growing disillusionment and anger that is growing against the regime. The false aggressiveness of the regime only shows that its downfall is near.