Following a lethal attack on the Jaffna University Students’ Union Secretary, Dharshananth, who was on his way to the university on Friday to organize the Mu’l’livaaykkaal Remembrance Day, students demanding the Vice Chancellor to get assurance for their security, decided to boycott classes and continue their struggle in various ways until the security question is resolved. We are not waging an armed struggle. We fight for our rights and for our people through democratic means. But politically motivated violent attacks continue to be unleashed against us. The International Community has committed a colossal blunder. Three years after the genocide none of the culprits has been punished. Our message to Tamil political parties and to the diaspora is that their actions should not betray our hopes, students said in their speeches. 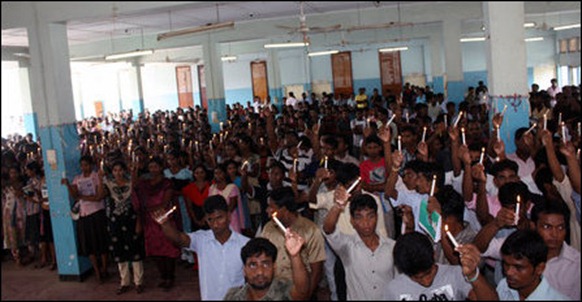 The message coming from the students of the University of Jaffna on the blunders of the International Community and on the need to remind Tamil politicians and the diaspora about what action has to be taken, gains significance when sections of politicians and the diaspora tend to cite the ‘unpreparedness’ of the IC for their deviations, political observers pointed out.

A week ago, Mr. Sumanthiran of the TNA speaking in Jaffna implied that Tamils have to set the political course listening to only what India and the USA say.

On Tuesday, speaking in Oslo at a gathering organized by some diaspora Tamils and participated by TNA parliamentarian Suresh Premachandran, Norway’s failed peace facilitator Erik Solheim, ignoring the IC failures, but denouncing the independence of Eezham Tamils, wanted the Tamils to “behave in an appropriate manner with the international community,” and “abide by the international community.”

Is there any credibility in him telling this on behalf of the International Community and sections of Tamil politicians and the diaspora citing the line of thinking as ‘guidance’ for their polity, when the peace facilitators themselves were blamed in the Norwegian report for their failure in abiding to their responsibility to the real international community – the humanity, critiques in Jaffna said.

On Friday, the Jaffna University students were open in telling the Tamil National Alliance (TNA) and the diaspora to forge a united leadership with a working programme that justifies the aspirations of the genocide-affected people and not get succumbed to deviations.

We publicly supported the TNA in the post-war elections because of its legacy. But now we find that there are many agendas within it. If the TNA doesn’t become trustworthy it will be rejected, students expressed their feelings in the speeches. 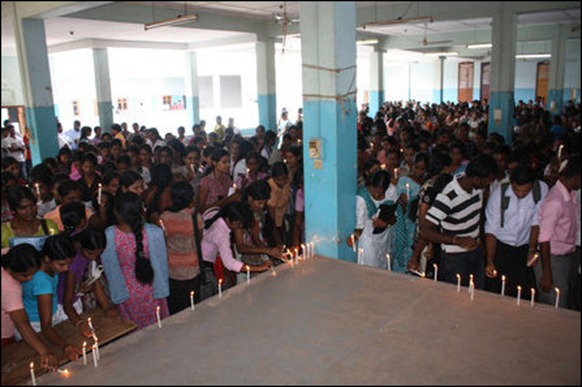 Mu’l’livaaykkaal remembrance was observed at the university in an emotionally charged atmosphere.

Thousands of students gathered and held torches to remember those who were killed in the genocide.

Many of the speakers at the event were those who have had first hand experience of witnessing the war and have had lost their kith and kin.

After observing the remembrance students gathered in front of the university office and demanded the Vice Chancellor, Professor Vasanthi Arasaratnam to give an assurance to them on their security.

The students were angered when the VC failed to appear before them but sent only a message that she would speak to ‘concerned’ people on the matter.

Professor Vasanthi Arasaratnam who had to depend on the support of SL minister Douglas Devananda to become the Vice Chancellor has cut an image as a stooge of the Colombo government.

SL minister Douglas Devananda has appointed his stooges to the Governing Council of the University too, students accuse.

The agitating students shouted slogans against the VC and burnt an effigy of her in the campus.

Last year, when the president of the University Students’ Union Mr. Thavabalasingham was brutally attacked, boycotting students returned to classes after the VC giving an assurance.

The VC caring only for her survival has no voice to protect the students, the agitating students said.

Meanwhile, students of the Vavuniyaa campus of the University of Jaffna remembered the Mu’l’livaaykkaal genocide amidst tight watch of the occupying Sinhala military and its intelligence units.

Hundreds of girl students who were holding candles were seen crying at the event in Vavuniyaa.