Addressing a huge gathering of Eezham Tamils who had gathered to remember those massacred in May 2009, speakers at the “War Crimes Day – May 18” at Dusseldorf highlighted the role the powers in the International Community played in abetting the genocide of the Eezham Tamils, besides emphasising the need to remain faithful to the fundamentals of the struggle for Tamil Eelam, on Friday. While Dr. Andrew Higginbottom, lecturer at Kingston University, London spoke about how the US-UK axis provided the necessary background for the Mu’l’livaaykkaal massacre to happen, Ninthujah Sutharshan, research scholar and Deputy Chief of Eezham Tamils’ Country Council in Germany, said that the ideals of the Tamils’ struggle “was defined in Mullivaikkal by the people who died defending that cause and cannot be redefined in Berlin or London or Paris or New York to match our comfort and convenience.”

Criticizing the recent US-backed resolution at Geneva that seeks to limit Tamils’ aspirations within a unitary Sri Lankan state, Dr. Higginbottom said “we have the travesty of the UN Human Rights Council two months ago where all states accepted either with the mildest criticism or none at all the Sri Lankan government’s LLRC which all international NGOs rightly condemn as a huge and blatant cover up of the massacre.”

The British lecturer asserted that “the killing fields of Mu’l’livaaykkaal were not only made possible but were the predictable result of the coordinated breaking of the peace process by the US administration that torpedoed talks and the UK government insisting on the banning of the LTTE.”

“These two interventions criminalised one of the two main parties in the peace talks, while at the same time the US, Britain, Israel, China and others equipped the Sri Lankan state with the military means to carry out its genocidal final assault on the Tamils. This was a crime against peace, and the crucial point here is the alliance between Sri Lanka and states of the so-called international community who backed and provided impunity for genocide: before, during and after May 2009.”

In an evocative speech, Ms. Sutharshan talked about the protracted nature of the genocide of the Eezham Tamils, “Mullivaikkal did not mark an end to the genocidal brutality unleashed against Tamils by the Sri Lankan state. It in fact became a starting point to a renewed cycle of genocidal acts… More than ever, tens of thousands of Sri Lankan troops occupy the lands and the lives of our people. They rob, rape, and kill the survivors while desecrating our dead. They imprison and torture and plunder and pillage… When the criminals rule, the crimes become rules. Their genocidal brutality lies behind us and their genocidal intention lies ahead of us.”

Hinting at how the establishments were ‘persuading’ the diaspora to accept the unitary Sri Lankan state and live with the genocide, she added that “The genocidal intentions can go well beyond the national frontiers of Sri Lanka as long as it’s protected and backed by powerful accomplices. Therefore it has now reached our own door steps. It threatens us to back down and to subjugate ourselves to limitless brutality and vicious arrogance of the Sri Lankan state.”

“That’s called as the way to reconcile with the oppressor. The mass murderers walk around us with immunity while our own brethren languish in prisons. A state that has at least killed over 40,000 civilians is still treated as a respected member of the global ruling club while the surviving victims are being branded as terrorists and thrown into prisons.”

In a special address, former TNA parliamentarian Jeyanandamoorthy said that “without falling into the trap of the world powers, we must follow the deep philosophy of our leader in fighting without compromise for Tamil Eelam.”

On behalf of the Tamil Women’s Organization, Suya Senthil talked about the various forms of atrocities that Tamil women in the homeland were being subject to. 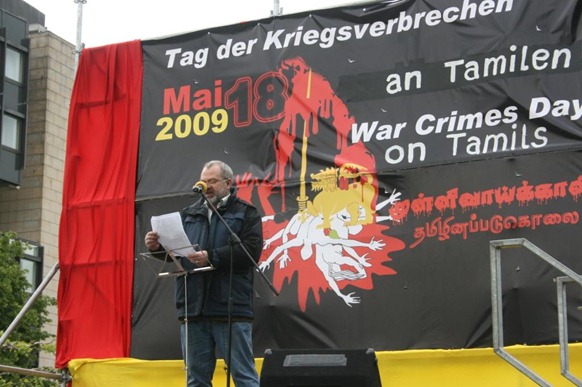 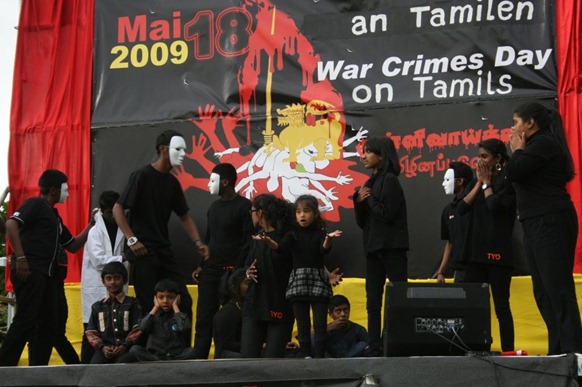 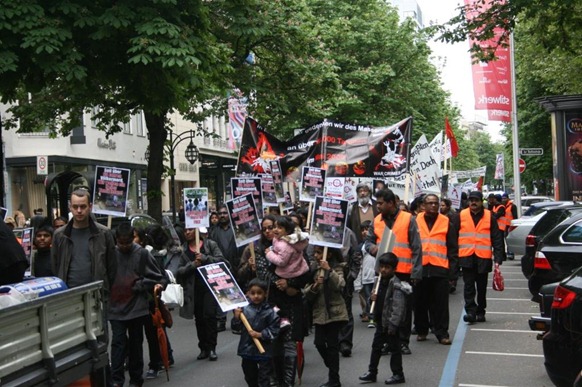 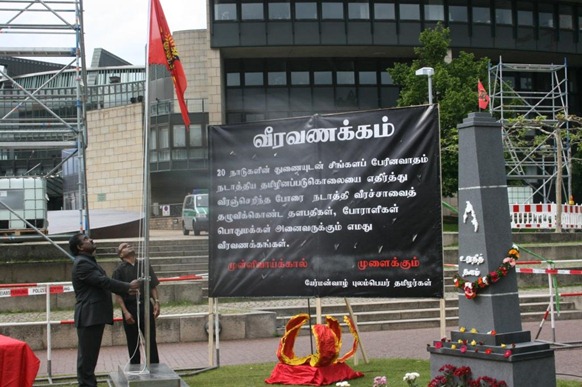