Eezham Tamils from across the UK gathered at Trafalgar Square, London to remember the Mu’l’livaaykkaal massacre at a remembrance event organized by the British Tamils’ Forum, on Saturday. With participation from the main political parties of the UK, diaspora groups and activists from the homeland and Tamil Nadu, speakers at the occasion emphasised the need for an independent international investigation in the island, a probe into charges of genocide committed by the Sri Lankan state, ending the militarization and colonization of the Tamil homeland, and self-determination of the Tamil people. Many of the non-Tamil speakers also strongly stated that the UK should stop deporting the Eezham Tamil asylum seekers back to the island. The event drew a crowd of over five thousand the organizers said, citing police sources. 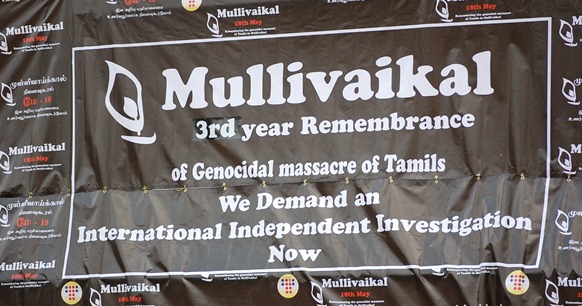 TNA Parliamentarian S. Sritharan, talking about various forms of atrocities during and after Mu’l’livaaykaal, noted how the GoSL was clamping on various democratic voices among the Tamils, referring to the recent attacks on the Jaffna University student leader and the CID interrogation of Mannar Bishop Rayappu Joseph.

Pointing out how ‘reconciliation’ was being used a word to repress the political aspirations of the Eezham Tamils, he talked about how establishment-politicians like Erik Solheim sought to contain the diaspora from articulating their demands by talking about a ‘home-based solution’. He also opined that the ever increasing Sinhala militarization of the Tamil homeland placed greater onus on the diaspora to be more active in pursuing the demands of the Eezham Tamil people.

Video statements from Tamil Nadu activists Pazha Nedumaran, Vaiko, Kolathur Mani, Seeman, Thirumurugan Gandhi, conveying their solidarity with the occasion and urging the Tamil diaspora to stand firm by their just demands, were relayed. Speaking at the event, TN film maker V. Gowthaman said that India’s position would change only if Tamil Nadu’s people united as one voice for the Eezham Tamils.

British parliamentarians who addressed the vigil included Lee Scott (Conservative), Barry Gardiner (Labour) and Simon Hughes (Liberal Democrat). An audio statement from Ed Miliband (Labour) and a video clip of Gareth Thomas (Labour) received for the occasion was played. They were unanimous in arguing for an independent inquiry into war crimes committed by the Sri Lankan state.

Tim Martin of Act Now spoke against fragmentation in the diaspora and stressed the need to work together to bring the perpetrators of the genocide of the Tamils to justice.

Speaking about how Sri Lanka was militarizing and colonizing the Tamil homeland and trying to break the will of the Tamil people by spreading a “defeatist mentality” among the Tamil diaspora through various means, Ravikumar of the BTF emphasised the need for the Eezham Tamils to campaign with greater vigour with Tamil Nadu in other parts of India. He also said that while keeping in mind the art of political manoeuvring among establishments, it was also necessary to popularize the struggle among other oppressed nations and peoples.

Talking about the role of the Tamil youth in the freedom struggle, Visagan Balakumar of the TYO said that that the Eezham Tamil nation’s security, the island’s peace and the region’s stability lay in the creation of Tamil Eelam.

Janani Jananayagam, UK spokesperson for TAG, said that after 2009 when “Every international institution abandoned its duty and walked away. Not just the United Nations and international aid agencies but also the international media,” now 3 years later, the Sri Lankan model of ethnic conflict is the test of credibility of the international rule of law.

Manny Thain, National Co-ordinator for Tamil Solidarity, Rasiah Jeyarajah of the BTF, Jujini Mano from the TYO also spoke at the event. A recorded voice message of Fr. Emmanuel was played at the Square.